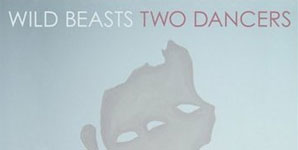 From the first few notes of early single 'Brave Bulging Buoyant Clairvoyants', it was always plain to see that Leeds-via-Kendal four piece Wild Beasts were anything but your average runoff-the-mill trad indie-rock band. From Hayden Thorpe's dazzling falsetto to the simple yet effective musical accompaniments that recall such eighties paradigms as U2 and The Smiths in their heyday, Wild Beasts have often fallen into that Marmite category; you'll either love them or hate them. At times, 2008's debut long player 'Limbo Panto' for all its ambitious qualities found itself all too often smothered by its own eccentricity, occasionally forsaking tune for want of trying to sound too unique, out there on a limb and a prayer for sure and genre-wise non-definitive yet painstakingly almost too damn clever and audacious for its own good.

Nevertheless, the potential was always evident, and even if it took another five years and two records, only the most foolhardy of souls could deny that Wild Beasts had it in them to create an album of astounding, breathtaking quality. That we only had to wait another twelve months is something of an achievement in itself. 'Two Dancers', you see, isn't just a giant leap forward from 'Limbo Panto' and its whimsical oddities, it quite simply sets the benchmark not only for the rest of 2009, but for any artists in years to come, particularly those that like to toss the words "original" and "groundbreaking" about in some self-referencing posture with gleeful abandon.

They say a change of scenery can often work wonders and in the case of Wild Beasts, having already relocated from the Cumbrian backwaters to the creative hub of Leeds four years ago, a sojourn to the remote countryside of Norfolk at the turn of the year seems to have worked wonders. Indeed, the production skills of Richard Formby, quite possibly one of the most underrated studio technicians of the past two decades having been responsible for definitive releases from the likes of The Telescopes, Pale Saints and Spectrum, shouldn't go unrecognised here. While there's no doubting the quality of the songs on display here, Formby's eloquent sheen puts the finishing touches on the likes of the title track's two parts and lead single 'Hooting And Howling' in particular to the point where every subsequent play results in at least one new sound being channelled through to the listener.

However, it's the pop element of 'Two Dancers' that elevates the record above any modern day contemporaries you'd care to mention. Thorpe's vocal is now more comparable to Associates mainman Billy MacKenzie from their 'Sulk' heyday, not least on opener 'The Fun Powder Plot' or album standout 'We Still Got The Taste Dancin' On Our Tongues', a delightful four-minute romp that would be number one from now until the end of time in any fair-minded parallel universe. Where the former's melancholic 'How Soon Is Now' style build-up culminates in Thorpe's "boot up your asshole", the latter is something of a celebratory moment, initially "scaring the oldies into their dressing gowns" before blissfully announcing "we got gusto, we are headstrong!"

Forthcoming single 'All The King's Men' meanwhile, where bassist Tom Fleming takes lead crooning duties highlights yet another side of Wild Beasts, floating along on a whim and a prayer while indignantly listing conquests far and wide ("Girls from Roedean, girls from Shipley, girls from Hounslow, girls from Whitby") like a lothario's contact book set to music. The rhythm section of Fleming and drummer Chris Talbot come into their own on the sensual 'This Is Our Lot', Thorpe's vocal pronunciation hammering home his intentions from the off ("We're all quiffed and cropped/This is our lot/We hold each other up heavy with hops").

By the time 'Empty Nest''s poignant waltz brings 'Two Dancers' to an unblemished close, we're left in no doubt that in just over half an hour's worth of music, Wild Beasts have created one of this year's - if not decade's as a whole - finest albums. As a standard bearer for the future, 'Two Dancers' should be heard by any aspiring group of musicians intent on taking their first steps into the music industry, as its creators haven't so much as merely raised the bar of expectation, but soared previously unattainable heights themselves in the process.