Houston Details Drug Use: 'We Laced Marijuana With Rock Cocaine' 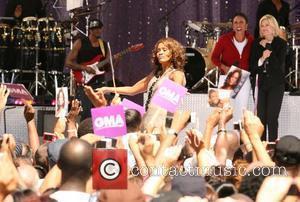 Whitney Houston has detailed how far her drug taking went at the height of her substance abuse - she'd lace marijuana with top-quality rock cocaine and spend weeks just staring at her TV and spacing out.
In a candid new interview with Oprah Winfrey, the singer admits there were days she and then-husband Bobby Brown would sit next to each other for days and hardly speak to one another - because they were so stoned.
But Houston insists they only bought the good stuff, and never lowered themselves to street drugs, like crack.
She says, "We weren't buying, like, $20 jumbos; we were paying money, we were buying, like, an ounce... We weren't doing, like, pipe smoking, we didn't get that far.
"You put your marijuana, you lace it (with cocaine), you roll it up and you smoke it in your weed... It's almost like heroin and cocaine speedballing, but you level it off with the marijuana."