Whitney Houston's daughter Bobbi Kristina Brown broke down in tears as she accepted a prize for her late mother at the Billboard Music Awards last night (20.05.12). 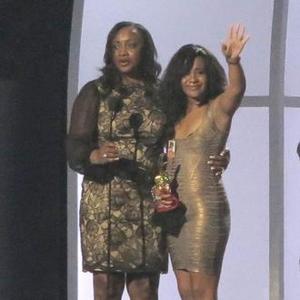 Whitney Houston's daughter broke down in tears as she accepted an award for her late mother.

Bobbi Kristina Brown said she felt ''blessed'' to have been part of the 'I Will Always Love You' hitmaker's life and thanked people for supporting her family through all of the singer's difficulties until her death in February as she accepted the Millennium Award at the Billboard Music Awards on Sunday night (20.05.12).

Bobbi Kristina took to the stage with Patricia Houston - her mother's sister-in-law and manager - and wept as she said: ''I really want to say thank you to everyone who supported us through it all.

''Not just from when it was good but when it was bad, too. Thank you for showing that much love, because she deserved it ... I'm just blessed to have been in such an incredible woman's life. There will never be another one, ever.''

Whitney - who died as a result of accidental drowning in her bath and the effects of heart disease and cocaine use - was the subject of a musical tribute at the show, with her 'Sparkle' co-star Jordin Sparks singing 'I Will Always Love You' and John Legend performing 'The Greatest Love Of All' following an emotional introduction from Whoopi Goldberg.

Whoopi said: ''I adored Whitney Houston. What all performers want and need and should get is love, and many of us here loved Whitney, and even if you're one of those who didn't show the love to Whitney, now is your chance, because tonight, that's what we're doing: We're going to be giving Whitney the greatest love of all.''

Musical tributes were also paid to Donna Summer - who died last week from cancer - with Natasha Bedingfield singing 'Last Dance' and Cee Lo Green performing '(You Gotta) Fight for Your RIght (to Party!)' in remembrance of Beastie Boys star Adam Yauch, who died on May 4.

Katy Perry - who was accompanied to the event by her 91-year-old grandmother - said she felt ''incredibly honoured'' as she picked up the Spotlight Award in recognition of tying the record set by Michael Jackson of five number one hits from the same album, 'Teenage Dream'.

She added: ''Most of all, of course, I always say that the people have the power, so I want to say thank you to the glittering, gorgeous community of fans out there.''

Taylor Swift was named Billboard Woman of the Year, with Lil' Wayne receiving the respective male honour, though he was not present at the ceremony - which took place at the MGM Grand Garden Arena in Las Vegas - to pick up the prize.

Casting Crowns, 'Come To The Well'

Pitbull Feat. Ne-Yo, Afrojack & Nayer 'Give Me Everything'

Adele 'Rolling in the Deep'

Foster The People 'Pumped Up Kicks'

Adele 'Rolling In The Deep'