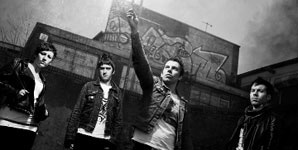 Having impressed hugely with their debut album 'House Of Commons', which is due out in May, Bradford's White Light Parade* are tonight performing a hometown headline show. Next month sees their tour schedule swell considerably, including multiple performances in Leeds and London.

Beginning their set with a forceful 'Burn It Down', it is quickly notable that the quartet doesn't look out of place on a stage that has in recent years has seen performances by the likes of Stereophonics and Franz Ferdinand. They make use of the space afforded to them and play with enthused energy, while Danny Yates impressively matches the crisp vocals found on the songs' studio versions. Equally strong are his brother's - Jonno Yates - menacing growl on the likes of the crunching 'Riot In The City', which leave you wondering if he'll be able to speak the following day. Next single 'Wake Up' and 'Young Believers' prove popular with the dancers in the audience and showing they're not ones to rest on their laurels they even throw in new track 'Rebellion Call', featuring a rap by the latterly mentioned Yates brother. Eminem need not worry, but it's certainly better than attempts by Robbie Williams and Madonna in the past. 'We Start Fires' translates itself to stage as an adrenalised fist-pumping anthem, while the appropriate finale of 'Wait For The Weekend' allows everyone a last chance to enjoy themselves. Slight mistakes mean their live performance isn't flawless just yet, but they more than make up for it with intensity and songs that will only sound better as their crowds get bigger. Catch them now and you'll be glad you did because with any justice they'll be huge.