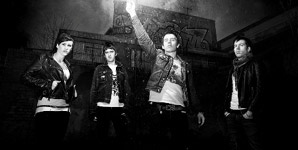 The saying goes that it's better late than never and that is certainly the case tonight for White Light Parade*'s album launch party. Their impressive punk/rock debut, 'House Of Commons' was released back in May and tonight a couple of hundred admirers of it are in attendance to celebrate with the Bradford quartet.

Even from the opening bars of 'Burn It Down' it is quite clear that WLP* have struck a chord with their tales of working class life, as fists pump, beers fly and manly cries come in abundance from the audience. Danny Yates is in good voice and soon gives brother Jono Yates a vocal turn, his rougher tone powering through 'Hum Drum' as bodies begin to surf and odd trainers go airborne - it is clear that both performers and watchers are keen on having a good time, leading Danny to comment "it's like a kid's party" at the manic scenes. Energy levels go up a notch again with the danceable, ska-infused new number 'Can't See The Wood For The Trees', while 'Young Believers' couldn't be any more aptly-titled judging by the favourable reaction it receives.

Former single 'Turning All The Lights Down' deserves mention for producing a mass sing-a-long - which begs the question of why it is missing from the album - but the set highlight is undoubtedly next single 'We Start Fires'. A testosterone releasing primal anthem that is vicious in it's delivery by the band; the crowd's reaction is to go mental from front to back, not just in the moshpit. Being a Friday night, Nici Todd's unmistakable drum intro to 'Wait For The Weekend' is as suitable a finale there could be and everyone enjoys a final dance. It rounds off a sharp performance that showcases WLP* are an enthralling live act, and should only grow stronger as their fan numbers build.