Review of House Of Commons Album by White Light Parade* 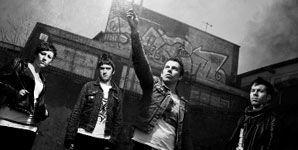 While many of the cities in the north of England enjoy a great musical heritage, few could argue successfully that Bradford has made a huge contribution to the art. White Light Parade* might just be the ones to change that; they're a quartet from the city who have so far toured with the likes of Supergrass and The Subways.

Crashing in on a wave of punky chords, 'Burn It Down' introduces an energetic approach to guitar music that culminates in a huge chorus that Danny Yates injects with attitude. It's not without content either, detailing ideas of escapism from your trappings, a theme common in debut albums. Yates' snarl goes into full Joe Strummer mode for 'Humorum', which proudly nods to the likes of The Clash and features a 'la la la' gang vocal which will no doubt be taken by audiences. It's at this point of the record that WLP* reveal a fantastic versatility, unleashing indie club anthem-in-the-making 'Wake Up'. Packed with hooks and poppy melodies, it is sublimely confident and will have people singing along to its message of realism before they're conscious of joining in. Better yet, it isn't a one-off moment of brilliance, as former single 'Wait For The Weekend' and 'Surrender' have similar qualities and implore you to dance along.

Those who prefer their music with more edge will find the frantic 'Shotgun' more to their taste, while 'We Start Fires' is a call to arms with a fist-pumping chorus as guitars thrillingly shift up through the gears. 'Young Believers' is an aptly named track as it encapsulates the spirit that is evident throughout 'House Of Commons', imploring 'give me something to believe in' - yet on this evidence the band may well find themselves being that 'thing' to those who hear them. They've produced a debut not incomparable to The Enemy's 'We'll Live And Die In These Towns' and prove that a fantastic album doesn't have to be revolutionary, it just has to be music of passion and quality. Both are abundant here and given the right exposure White Light Parade* could be one of the breakthrough acts of 2009, which would certainly be deserved. Bradford finally has a band to be proud of.