Westlife Were Ready For Split

Westlife have not started to think about life after the band yet but admit they had been expecting their split for a few years. 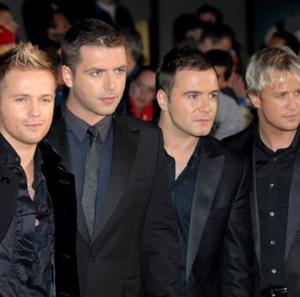 Westlife have been preparing for their split "for a few years".

The Irish quartet recently announced they will go their separate ways to the end of a tour next summer but are refusing to think about what will happen after their last concert.

Mark Feehily said: "We're not going anywhere just yet, so I'm not thinking about it. I don't know whether I'm doing it subconsciously or on purpose. But I think we've been preparing for the idea that it's not gonna last forever for a few years now."

Shane Filan added: "It will be kinda weird on the last night of the tour in Dublin next year, as that's when it will be scary. It's like, `What do you do after the concert?' Because that's it! It will be the last time ever! Do you go off for a drink; do you go for a cry? It's one of those weird moments that we haven't experienced, but when we do, I know it will feel like we've been hit by a ton of bricks."

While the band are comfortable with the idea of splitting, their manager Louis Walsh is struggling with their decision.

Mark told Britain's Star magazine: We're worried we'll have to set up a helpline for Louis because he wasn't happy about it at all! He is devastated, genuinely. I saw him the other night and I said, `So how are you feeling?' and he said, `I don't want to talk about it.' He's not there yet. But he understands."

Shane and Mark are joined in Westlife by Kian Egan and Nicky Byrne.