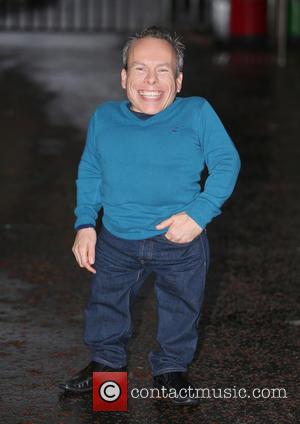 Picture: Warwick Davis - Photographs of a variety of celebs outside the ITV studios in London, United Kingdom - Wednesday 8th October 2014

Actor Warwick Davis is set to make his return to the Star Wars franchise for the latest sci-fi instalment.

The Harry Potter star originally played the Ework Wicket in Return of the Jedi when he was just 17, and now Davis, 44, is returning to his roots for the much-anticipated Star Wars: Episode Vii.

He confirmed the casting news on Thursday (16Oct14) with a video posted on YouTube.com, in which he waits by his phone for 17 months - and even grows a beard in the process - until director J.J. Abrams finally calls and invites Davis to join the cast.

It is not clear whether Davis, who also appeared in Star Wars: Episode I - The Phantom Menace, will reprise his role of Wicket or if he will be a new character.

Warwick Davis says being angry is a 'waste of time'