American rock heavyweights prove themselves more than the sum of their parts on their impressive first album. 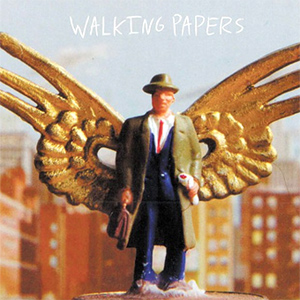 If ever the term 'Super Group' was applicable, it is to Walking Papers. For those of you not yet in the know, Walking Papers consists of Barrett Martin (ex-Screaming Trees Mad Season) and relatively unknown singer and guitarist Jeff Angell who has had a quiet career making records with his two previous bands Post Stardom Depression and The Missionary Position. These two are joined by the almost legendary Duff McKagan on bass, and occasional guitar solo interjections from Pearl Jam's Mike McCready; quite a pedigree.

Usually, when such a world class group of musicians get together, it is ultimately disappointing (think Audioslave and Brides of Destruction), but what Walking Papers have put together is a solid, interesting body of work opening with the subtle, quiet, but still menacing beneath the surface Already Dead. There is a marimba accompanying your standard rock instruments delicately layered on top of a fidgety beat. It feels like the brooding calm before the storm, and so it proves to be.

When the curtain finally drops on the hard hitting punch of The Whole World's Watching and Red Envelopes, you hear a band not only raging with fire and passion, but also a bunch of guys just having a great time making music that matters. Mike McCready's Hendrix style guitar solo on the aforementioned Whole World's Watching is a definite high point of an album crammed full of highlights. It feels like some guys got together in a garage to have some fun and make some kick ass rock 'n' roll, and they were actually very good at it.

Given the skill of all involved, it is a delight when Walking Papers take it down a gear and try something a little more quiet and introspective. Leave Me in the Dark is about as close as they come to a love song, and it does as it should: it is tender, dynamic and anthemic. It is on these quieter songs that Jeff Angell really shines. His vocals are gravel rough and give the songs a kind of drawling cool that few bands can manage. This is apparent nowhere more than on the piano and marimba based The Butcher. Angell sings with such passion and grit that it's hard to believe that these lyrics are not autobiographical in some way. The man has a talent for telling stories with a great deal of conviction and making them believable.

The album's closing song - Independence Day - is another definite highlight. That they don't run out of steam or imagination once over the course of nearly fifty minutes says a lot about this band. We can only hope that this is not their one and only offering.