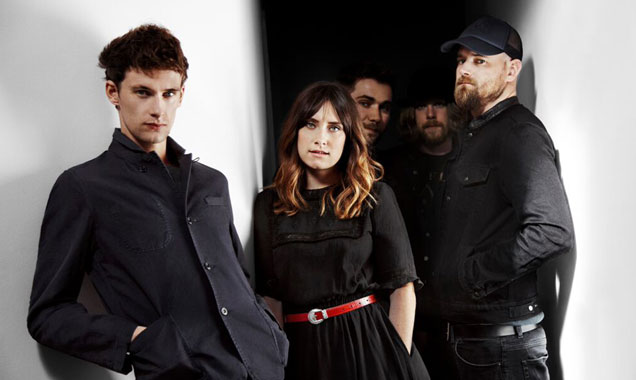 An Interview with Walking On Cars

Hailing from the seaside town of Dingle, Ireland, Walking On Cars are part way through their summer tour, and preparing to release their debut album later this year. In the meantime, Sorcha, the five-piece band's pianist, took some time to talk to us about song writing, reworking songs and organising five different musical styles into a band.

Hey, how are you?
I'm good - we're on our way to the UK at the moment so we're getting on a ferry. It's gonna take about three hours. It's generally not very rough so I hope we'll be okay.

'Catch Me If You Can' comes out next month but it has already been released in Ireland - do you think that staggering the release date across the world is beneficial for a single?
I suppose it kind of depends on our profile in different places. We're a bit better known in Ireland compared to England, so it just depends on how established we are. I think that effects the release-date plans in different places.

Between its Irish and digital releases, the single is doing pretty well - what are you most proud about with it?
We've been playing that song for about two years now, and it was the first track that we were really proud of and happy with, and the first song that fans started to sing back to us at gigs so it was always very special in that way. We recorded it previously about two years ago, so that was the first proper recording we ever did, and we've rerecorded it since then for the new record. But we've always been quite proud of it. The song is essentially the same; it's just had a different studio and better equipment. There's a bit of different production on it, but everything else is the same.

Who did you get to do the production?
We worked with two producers: Roy Kerr and Tim Bran. They did London Grammar's album and they worked with The Verb and a few other people. They're brilliant, and we spent most of last summer in their studio in Richmond. It was pretty amazing, and that's where we recorded all of the tracks for 'Catch Me If You Can' and it was a pretty cool experience.

What's been the biggest support you've received so far?
We sold out our tour at the start of March which was a moment where we were like 'Wait a minute - this is pretty amazing!' We sold out the Olympia and several other similar venues around Ireland. We got played on Annie Mac's 'Hottest Records' - that was pretty amazing! That was probably the biggest thing that has happened for us radio wise, so far in the UK, and we couldn't believe it. We were pretty delighted about that. Annie Mac did this show called Other Voices in Dingle which is the town we're from, and she presented it, so we knew her from back then. We're pretty delighted that she noticed us.

How long have you been working on the album?
For the past year we've been in and out of the studio, but in terms of the actual songs that are on it, it's a mixture between songs that we wrote almost four years ago, and more recent songs. It's a strange one, because we've obviously progressed and our writing style has changed over the years, but it all seems to jell well together, so we're really happy with how it's beginning to sound. It's pretty much recorded at this stage, we're just in the mixing process at the moment and fine-tuning the smaller details and stuff.

You say some of these songs are four years old - have you performed these live or will this be the first time people here them?
Oh yeah, we've performed them live. The way we generally do things, we spend time in our rehearsal space working on songs, and then we like to try them out in front of audiences just to get that initial reaction from people and to see how well it goes down. Quite often we've played a song to a crowd and thought 'you know what - I think we need to go back to the drawing board with this one' because we like to make sure it's working before we bring it to the studio. But with some of the songs it just happens really quickly and we bring it to the studio and it's fine, so it depends on the song.

Do you ever get disappointed if a song won't gel with an audience, or are you fine to rework it?
I think it's not necessarily whether it gels with the audience, because any time you play a new song with people anyway, it takes a while for them to get used to the songs. It's more about how we feel about the energy when we play it live - you know if there's something that needs to be changed.

Do you think it's beneficial to segregate writing from other band activities like touring?
To be honest, in our experience, we've done a mixture. We kind of have writing sessions while we're rehearsing for a tour, or in-between gigs we just go home and jam out new tunes, while also working on our live show at the same time. Touring is kind of new to us though, so we've never been in the situation where we have to go writing while we're on the road, but that's something that will probably be happening very soon; hopefully it'll work out!

You've released two EPs so far - did you find any challenges when moving from EPs onto this album?
Not really; I think it was just the natural progression. Obviously from day one, we always wanted to work towards an album, and for financial reasons as well as wanting to test the waters, we did the EPs - even to just get used to the whole recording process and going into the studio and figuring out how we all work in that situation was good. We did one EP a couple of years ago and that was our first learning curve, then when we went onto the 'Hand in Hand' EP, we were a lot more confident with how to approach things. Now that we've done all of that, I think we're really know where we want to go with the album, and how we want it to sound. I think all of those processes have been beneficial in the lead up to the album.

As a five-piece, were there times when a particular part wouldn't necessarily work in a song and you had to write around it?
Oh, definitely. When the five of us are working together, we always have to work off each other and everyone's instruments need to be complementing each other, so you do have to adapt what you're playing to work something else in. It's about making everything fit in the right place.

With all your current festivals lined up for the next few months, which are you most excited about?
I'm looking forward to Kendal Calling, because I know it's in the Lake District and it's meant to be stunning. I'm looking forward to going to that part of the country. We already played Live at Leeds a couple of weeks ago and we did The Great Escape last week, and we're on the way to Dot to Dot now which is Manchester, Bristol and Nottingham. They're all city festivals, so it's not the same as Kendal Calling or Reading and Leeds, but you never really know when you're going to a new crowd. We like to put on a bit of a show as much as we can, and we're obviously having a bit of fun with it because we're a new band - especially in the UK - we have to have confidence in what we can do, and hopefully people will like it.

Are there any differences between English and Irish fans?
I don't think so, no. Generally when you're playing to a new crowd there's always that 'ooh, who are these guys now? I wonder what they're gonna be like', but across the board, it's been a great reception so far. We did a few support slots with James Bay, so we played Shepherd's Bush, Bournemouth and Glasgow a couple of months ago, and surprisingly for a support slot, we got a great reaction at all of the gigs. Usually it's hard as the support band, because you don't know what the crowd is going to be or how they'll react to your music, but I think it's gone well so far.

How do you guys unwind after a long recording session or performance?
So, we're from this place called Dingle on the west coast of Ireland and we're all based there so we just go home and chill out with friends. It's on the coast so Paul, our bassist, and most of the guys play Pitch and Putt (a variant of golf), so most of the time you can find them playing that twice a day. And Dingle is, of course, famous for its many pubs as well, so we have a couple of local spots where we hang out; it's a great place to go and get away from all the madness of touring and gigging and all that.

What is the biggest influence on your music?
Well, I love Arcade Fire; they're a band I've loved for years and I just think they're amazing. They're amazing live, I love their instrumentation and their energy and I think they're great. But we all have quite different musical backgrounds. I trained classically and played a lot of Chopin and Einaudi, and then the lads like Dan and Evan would played and listened to a lot of heavier music like Metallica and Green Day. Patrick is a bit of a pop guy, but he would listen to anything really, and so would Paul. I think we all bring our own influence to the overall sound, so there's not one particular genre that we focus on or anything.

What phrase would you most like people to use when describing your band?
'Down-to-Earth', hopefully.

Where can people hear you next?
I'm trying to visualise the calendar in my head; so we're playing T in the Park, Reading and Leeds, Kendal Calling and that's most of the UK gigs that have been announced. We haven't got a definite date for the album, but after the summer sometime.