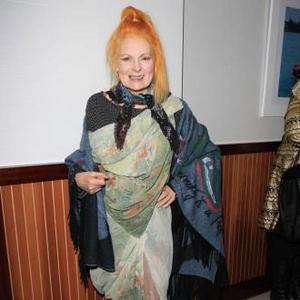 The 70-year-old designer - who is credited by many as starting the punk scene in the 1970s - thinks historical figures had a better idea of how to clothe themselves and encourages buyers to think more about their purchases rather than getting into ''disposable c**p''.

She said: ''In history people dressed much better than we do today.

''If you saw Queen Elizabeth it would be amazing, she came from another planet. She was so attractive in what she was wearing. People have never looked so ugly as they do today regarding their dress. Nobody is thinking. I'm talking about all of this disposable c**p. So I'm saying buy less, choose well, make it last.''

Vivienne was speaking as she showed her Red Label collection in London yesterday (19.02.12), with celebrity chef Heston Blumenthal and former model Janice Dickinson among the celebrities on The Front row.

High waisted trousers were also prevalent in the Autumn/Winter 2012/13, as was Vivienne's trademark tartan.

Matthew Williamson was among the other designers to show on Sunday, with a collection featuring above-the-knee skirts in a collection of metallic greys and blues.

Acne's range of red, orange and white clothes lit up the catwalk, with waist belts and coats making their presence known.