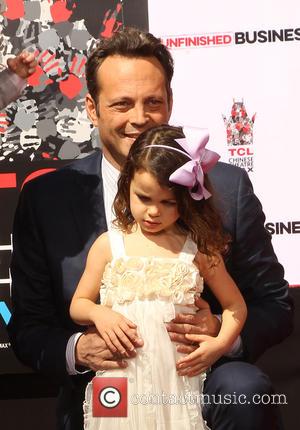 Picture: Vince Vaughn and Lochlyn Kyla Vaughn - American comedy actor Vince Vaughn was photographed as he was awarded with a Handprints and Footprints Ceremony at...

Vince Vaughn was joined by his wife and kids, as well as friends Jon Favreau and James Marsden, at his handprint ceremony in Los Angeles on Wednesday (04Mar15).

The Wedding Crashers star left his mark outside the TCL Chinese Theatre in Hollywood and he was joined on the red carpet by his wife, Kyla, and their two children, Locklyn, four, and Vernon, 19 months, for a family outing.

During the event, Vaughn was feted in a speech by his longtime friend Favreau, who worked with the actor on films including Rudy, Swingers and Couples Retreat.

Vaughn was also supported by his Unfinished Business co-star Marsden as he dipped his feet and hands in cement to mark his place in Hollywood history.