WigWam - Check Out My WigWam Video 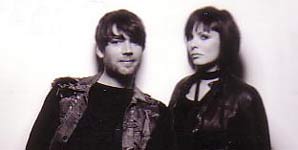 What do you get when 90's legend, the inimitable Betty Boo enters the studio with Blur's louche bassist Alex James and start working together for the first time? The answer is WigWam and late March 2006 sees the debut eponymous spiky pop dance single from the duo. The unlikely pair have been working in the studio for the last year on and off, mostly with producer Ben Hillier, and former Boo collaborators The Beatmasters - creating an album of experimental yet accessible 21st century pop.

Betty Boo formed her first band The She Rockers aged 16 whilst still at school, and the success of their album took her to New York to work with the legendary Public Enemy. With their encouragement she decided to go solo and exploded into the charts in 1989 as the featured vocalist on The Beatmasters top 10 hit 'I Can't Dance (To That Music You're Playing)'. She went on to write and produce her debut album 'Boomania' in her bedroom which spawned two huge worldwide hits 'Doin' The Do' and 'Where Are You Baby' and was voted the Best New Artist at the Brit Awards in 1990. Her sassy, powerful music and image launched a thousand wannabe's and it's no great shock that when the creators of the Spice Girls were placing the initial adverts they were looking for '5 Betty Boo's'. The follow up album 'Grrr!' was also hugely successful but then due to personal reasons she retired from the music industry for over 5 years (giving up the chance to sign to Madonna's Maverick label). In 2000 she was persuaded to start working again and wrote the debut single for TV reality show stars Hearsay. 'Pure and Simple' went on to be the fastest selling debut single of all time and was awarded the Ivor Novello for the biggest selling song of 2001. Having then gone on to write tracks for several other people (including songs on Girls Aloud's debut album) she decided to go back to working for herself, and having been friends with Alex James for some time they decided to get together.

Alex commented "She is the naughtiest girl I have ever met and has an ability to ride a backing track like most people ride a bicycle. She can sing like a sparrow. It's the greatest pop voice ever, bar none. As Madonna said to her 'You are everything I wish I was.' 'Nuff said. We are both married, not to each other."

The single is released on Instant Karma (cd only b/w 'WigWam' Ben Hillier Mix) and has already been described by the legendary popjustice.com as " 3'54" of completely ridiculous modern pop music whose chorus goes "checkin' out my wigwam, wigwam, wigwam, checkin' out my boo, boo, boo". It is very danceable and just totally brilliant."

'WigWam' is released on 3rd April.