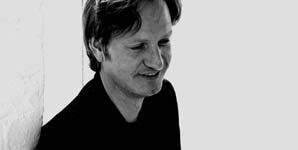 Steven Lindsay releases his new single, Monkey Gone To Heaven, a cover of the Pixies classic, on June 25th 2007. His new album Kite was released earlier in June.

Steven Lindsay's extraordinarily effortless cover of Pixies' Monkey Gone To Heaven that really gives the game away: knowing yet naÃ¯ve, insular yet universal, Lindsay's sanguine electronic arrangement and stunning vocal performance serve to make this song as meaningful and direct as it could ever hope to be. For the record, Lindsay says that his reason for choosing the song was that he "had been listening to stuff that switched me into music in the first place like Bowie's Low/Heroes phase, early Roxy Music, post-Punk and things with a strong aesthetic and more of an oblique sensibility. The Pixies song always fell into that category for me." Steven Lindsay toyed with fame briefly in the 1990s with his band The Big Dish and albums like Creeping Up On Jesus and Satellites but it wasn't until 2004 and his first solo release, Exit Music, that people really began to sit up and take note. Exit Music was one of those rare items, a record instantly recognisable as a classic but also one that grew and grew in the memory leaving an indelible impression in your head.