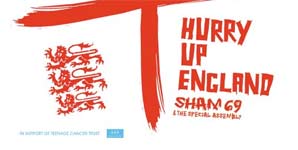 The fight for the best World Cup anthem now broadens with the release of "Hurry Up England" The Peoples Anthem on Parlophone on June 12th. "Hurry Up England" is played by Sham 69 & The Special Assembly, which includes Graham Coxon on guitar. It was produced by Stephen Street.

"Hurry Up England" was the winner of Virgin Radio Breakfast Show DJ Christian O'Connell's search for a People's Anthem to accompany England's bid to win the World Cup. Virgin Radio listeners voted for in their thousands for Jimmy Pursey's adaptation of his Sham 69 hit "Hurry Up Harry".