Justice Vs Simian - We Are Your Friends Video 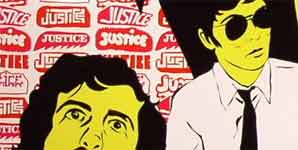 Artist: Justice Vs Simian
Song title: We Are Your Friends

Justice Vs Simian
We Are Your Friends
Video Stream

Justice are being hailed as one of the most exciting acts in ages. 'We Are Your Friends' (released July 3rd 2006) is what started everyone talking. Taking the shouted refrain, 'We are your friends, you will never be alone again. Come On!'

Parisian's Xavier de Rosnay (23) and Gaspard Auge (26) re-wired Simian's 'Never Be Alone' into a monster club anthem. 'Never Be Alone' was licensed from us by Daft Punk's manager Pedro Winter for his new Ed Banger records and was released in limited quantities last year. 'Never Be Alone' now titled 'We Are Your Friends' will be getting the full release it deserves on Virgin's Ten Records imprint on July 3rd.

With new mixes included here from the hotly tipped Radio Slave with Spencer Parker and Lee Cabrera, this is going to be getting lots of attention in the coming months. Justice are working on their debut album for release later this year. The next single from Simian Mobile Disco will be Hustler (Kitsune Records) later this year.