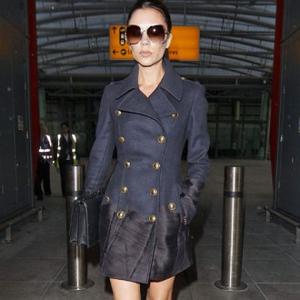 The singer-turned-fashion designer - who is married to Los Angeles Galaxy soccer player David Beckham - explained having a trans-Atlantic marriage stops the couple from getting bored with one another.

She said: "Maybe that's why we're not bored with each other after 11 years."

However, the 36-year-old star - who splits her time between Los Angeles and London - admitted she prefers the US city because people aren't as interested in her family because close friends Tom Cruise and Katie Holmes live nearby with their four-year-old daughter Suri.

Victoria - who has sons Brooklyn, 11, Romeo, eight, and five-year-old Cruz with 35-year-old David - added to Britain's Vogue magazine: "To be honest, no-one's that interested in us - not when Tom Cruise is down the road.

"Tom and Katie are really kind people - we'll have a more relaxed Sunday afternoon round at their place with all the kids than we would if we went round to some of the parents from school."