David and Victoria Beckham's son Romeo has reportedly signed a deal to create his own collection of sunglasses at the age of just eight. 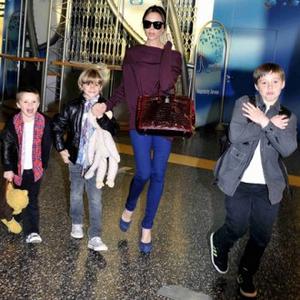 David and Victoria Beckham's son Romeo is to design his own range of sunglasses.

Romeo, eight, has reportedly signed a deal to create a line of children's shades after begging his parents to let him become a fashion designer.

A friend of the family told the Daily Mirror newspaper: "Romeo has a real eye for fashion.

"He has strong opinions on what works and what doesn't, and has been badgering David and Victoria for months about designing his own sunglasses. It is no passing whim - Victoria said she'd only back the project if he was certain he wanted to do it."

It is believed that well connected Romeo will call on his young celebrity pals - including Tom Cruise's daughter Suri Cruise, Leni, the six-year-old daughter of supermodel Heidi Klum, and TV chef Gordon Ramsay's four children - to model The Frames.

Singer-turned-fashion designer Victoria and soccer star David - who have two other sons, Brooklyn, 11 and five-year-old Cruz - are both thrilled with Romeo's entrepreneurial spirit and ambition.

The pal said: "There is a gap in the market for designer kids' shades that are 100 per cent UV protected and trendy.

"The glasses are made especially for children and will have a cool 'RB' motif on one arm. The range was originally going to be called Bambino Beckham. Both Victoria and David are delighted."