Victoria Beckham helped launch Fashion's Night Out in New York last night (06.09.12) as she and US Vogue editor Anna Wintour attended one of the events at a packed Bergdorf Goodman. 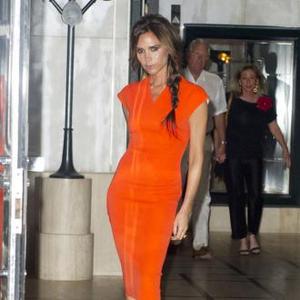 The Fashion designer looked stunning in one of her own orange dresses as she and US Vogue editor Anna Wintour attended one of the events at a packed Bergdorf Goodman.

Fashion's Night Out - the brainchild of Anna - was designed to improve sales in the industry following the 2009 recession and has since turned into a global night in 19 countries with shops staying open late and offering drinks, entertainment and free products.

As well as New York, big events were also held in London, Paris and Milan and in the UK capital, models Yasmin and Amber Le Bon were appearing in a fashion show at the Westfield shopping centre along with Elizabeth Jagger.

In Paris, thousands of eager shoppers took over the city's the 8th district, blocking Traffic for several hours on two boutique-studded avenues.

The centre of Milan was also packed with potential customers, sipping from plastic glasses of free cocktails dispensed by nearby boutiques.

New York is currently in the middle of its Fashion Week and Victoria is set to show her latest collection on Sunday (09.09.12).