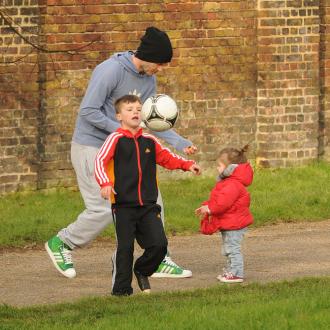 The couple and their four children - Brooklyn, 13, Romeo, 10, Cruz, seven, and 19-month-old Harper - were seen entering the Electric in London's Notting Hill along with other family members including the soccer player's mother Sandra and sister Joanne ahead of Cruz turning eight on Wednesday (20.02.13).

The group enjoyed a meal in the cinema's American-style diner, before sitting down to watch a movie together, with the building closed off to the public.

The celebration was described as ''perfect'' for the youngster, who has spent much of his life in Los Angeles and is a big fan of American food.

Earlier in the day, David, 37, took the children out alone and they were seen practicing their soccer skills in a local park - though little Harper was left in tears after taking a tumble on the grass and had to be comforted by her famous father and elder brother Brooklyn.

Cruz seemed most keen to show off his skills, and played alone while the rest of his siblings and his father took time out from the game.

Afterwards, the group had time to change their outfits for partywear ahead of Cruz's bash, which saw the birthday boy don an American sports-style jacket emblazoned with the word London teamed with smart black jeans.