Beckhams Spend Valentine's Day Together For The First Time 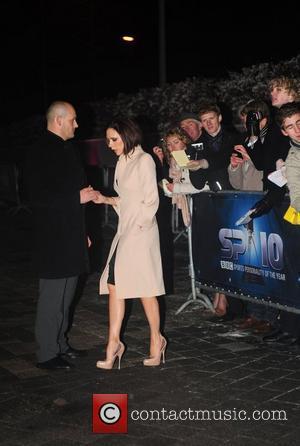 Picture: Victoria Beckham hands a pen back to her security after signing autographs for fans BBC Sports Personality of The Year 2010 - arrivals Birmingham, England...

Pregnant star Victoria Beckham's Valentine's Day (14Feb11) was extra-special - it's the first one she's spent with husband DAVID in their 14-year relationship.
The singer-turned-designer showed off her latest creations at a New York Fashion Week show on Monday (14Feb11), but she took the evening off to spend time with her soccer star partner, who she wed in 1999.
And Beckham reveals it's the first Valentine's Day they've spent together as a couple - because they're usually so busy working.
She tells U.S. chat show host Jimmy Fallon, "David surprised me which was really nice.
"He came to the hotel (after the show). It's the first time we've actually been together for Valentine's Day because he's always working or I'm always working, so it was nice."