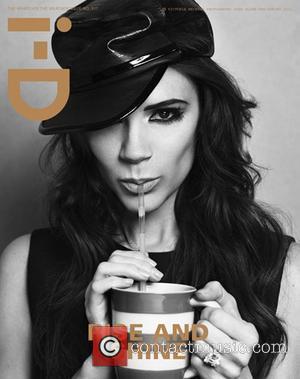 Picture: Victoria Beckham features on the front cover of i-D Magazine for the March issue February 2012 Supplied by (WENN does not...

Victoria Beckham wowed New York Fashion Week at her show on Sunday (12Feb12) when she debuted stylish new bags named after herself and baby daughter Harper.
The former Spice Girls star also took time out of primping and prepping her models for the catwalk show to post a photo of the new Harper bags on Twitter.com.
She teased fans by writing, "Meet Harper!"
The New York Public Library show was a huge success with husband David making his first front-row appearance at a catwalk event. The proud soccer star was spotted taking pictures of his wife's creations as her models strutted their stuff.
He told reporters, "It's been a successful morning. This is my first show and it's nice to be involved, and to see how hard my wife works."
The collection featured items inspired by the military, her son Brooklyn's love of baseball and the beanie hats her husband often wears, but it was the new two-pocketed handbag named after her daughter that drew the most interest at the show.
But the applause for the British designer's new autumn/winter line wasn't welcomed by all - it woke up little Harper, who was asleep backstage.