Review of White Fields and Open Devices Album by Vessels

To say that 'White Fields and Open Devices' is an eagerly anticipated release is something of an understatement. If the Leeds Society for Experimental and Progressive Rock Music produced a calendar, in which every month revealed the pale emaciated nude frame of one of the city's esteemed post-rock captains preserving his dignity with a Crimson Tide or early Genesis LP, if such a society existed, and if they made such a calendar, the release date for this album, whatever it is, would be marked upon it in nothing less than bold italics. 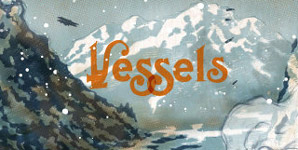 That is to say, the weight of expectation was on Vessels to make a record which did themselves justice. For a couple of years now they have been one of the most exciting live bands in the country, bewildering and endearing audiences with their sheer scale. The sound of Vessels is big, in every sense. From the wall of delayed, distorted guitar sound and precision double drumming down to intricate glitch patterns and piano arpeggios; they do it all with virtuosic competency. If you'll excuse the cliché, a Vessels show is a journey, the audient is engaged with the band the whole way, fascinated by all the ideas and emotions that cycle in and out of the music. It's important to note that the multi-instrumentalism and skill serves the music, not the other way round.
'White Fields and Open Devices' was recorded in Minnesota with John Congleton, a quasi-celebrity in the relatively anonymous world of post-rock. For the purposes of this review, its pertinent to note that he has in the past produced records for Texan widescreen music-speaks-louder-than-words rockers Explosions in the Sky and a band Vessels cite as a major influence, Appleseed Cast. So the question is, did Congleton and Vessels capture anything on record that will advance their quest to create a unifying theory of music? (disclaimer; this probably isn't their quest). The album is a fair representation of the band's material. It is recorded and mixed well and is enjoyable. For (mainly) instrumental music as technical and progressive as it is, it is accessible and has its fair share of hooks. This quality they share with another of the bands reference points; Battles. For what can loosely be described as a 'post-rock' band, Vessels know how to write a riff and they know how to play fast. See opener 'Altered beast' and 'An Idle Brain and the Devil's Workshop'. In the more sanguine and melodically flowing sections, such as the beginning of the wonderful 'A Happy Accident' there is evidence of another post-rock pillar; Do Make Say Think. The just-audible use of a harmonizing effect on the sample of Bob Ross on this song shows a nice attention to detail, and helps to set the band further away from the dull post-rock-by-numbers bands that are thankfully a dying breed these days.

But back to the question - does this record match Vessels ambition? No. Although some of them are in 5/8 and have polyrhythms, they are still over-reliant on the delayed wall of sound guitars for their climaxes. And, respected as Congleton may be, he hasn't quite got the band at their heaviest sounding big enough to make these sections truly mindblowing. This record, whilst worthy of the band's name and in some ways essential listening, won't prove to be their opus. Vessels are a great band but 'White Fields and Open Devices' is just very good.