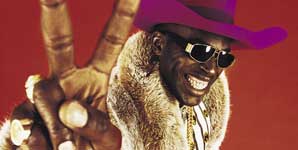 It's nice to see the spirit of funk is still alive and well with the lovers of classic dancefloor tracks. Vintage Grooves very much seems to be in the spirit of this similar to the fantastic Mastercuts selections that gripped everyone in the 90's. There are some absolute classic tracks here and what's clear is that 'Funk Volume 1' has certainly captured the ultimate essence of funk music with the bassline attitude that made funk so damn dirty.

The album starts off 'The Beginning Of The End' by Funky Nassau an awesome funk track and then into 'Pick Up The Pieces' by The Average White Band that was one of the first funk tracks that attracted me to this style of music. The list of great artists on this collection is first class like Sly & The Family Stone, Bill Withers, The O Jay's, The Fatback Band, Curtis Mayfield, Earth Wind & Fire and The Isley Brothers. We see the Headhunters with 'God Made Me Funky' at there most funkiest and lesser known gems like Raydio 'For Those That Like To Groove' and an awesome Bar Kays track 'Holy Ghost' that slaps you in your face.

Vintage Grooves 'Funk Volume 1' does have the usual popular funk tracks like 'Play That Funky Music' by Wild Cherry, Donny Hathaway 'The Ghetto' and popular disco track 'Got To Be Real' by Cheryl Lynn but all those tracks are classics. What differentiates this collection from other funk compilations is that it's very bass heavy and has a rawness to it. Then all of a sudden you get a crossover track to keep it fresh. The album flows very well together with gems of different degrees all wrapped into one sweet soundtrack. For lovers of funk you may be all too familiar with many of the tracks however I discovered a few nice cuts that I didn't own. However for a novice of this music it's a must. It's a perfect introduction to funk at its best and still totally relevant to current music. A great DJ pick up also.