Pavement. Mission of Burma. Guided By Voices. Yo La Tengo. Sonic Youth. These are bands have who helped shaped the sound of American indie during the eighties, nineties and noughties, and at some point in their careers, they have released records on Matador. It's now twenty-one years since Chris Lombardi founded the independent label, and its owners have taken the opportunity to give themselves a well-deserved pat on the back, hosting a star-studded festival in Las Vegas and releasing a lavish box set celebrating their past glories. But the label has a present and a future as well as a past, and that's where Matador Today comes in: it collects thirteen tracks they have released during the last two years. It's a compilation which showcases both Matador's strengths and the challenges they face. 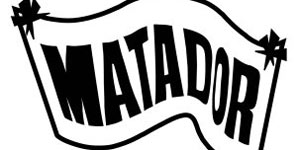 The label has made some surprising signings over the years. They've dabbled in hip hop and left-field electronica; they even signed Dizzee Rascal. Nevertheless, they have a signature sound. The stereotypical Matador band consists of four literate, college drop out boys (and very occasionally girls) offering a studiedly casual and subtly personal take on guitar-based rock; reconfiguring and deliberately undermining the accepted features of American rock music without ever trying to revolutionise it. This approach has resulted in some wonderful records, such as Pavement's elegant and elegiac Crooked Rain, Crooked Rain, and it was the sound which dominated nineties American indie. However, indie music - or at least the fiercely independent, auteurist form of indie embraced by many Matador signings - is associated with artistic creativity and boundary-pushing. The label therefore faces a challenge: do they sign bands with a 'Matador sound', bands who are trying to keep the nineties indie-rock torch burning? Or do they focus on groups are trying to push things forward? Matador Today suggests that they are trying to do both, with varying degrees of success.

Many of the compilation's best tracks are distinctly Matadorian. There's the surging post-punk of 'Sacred Trickster', a Sonic Youth track which wouldn't sound too out of place on their 1990 major-label debut Goo. There's Ted Leo & The Pharmacists' urgent story-song 'Bottled In Cork', and The New Pornographer's casually catchy 'Your Hands (Together)'. And there's Yo La Tengo's splendid 'Nothing To Hide', a scuzzy, fuzzy garage track which, as a result of its inviting vocals, sounds surprisingly warm and cuddly. On the other hands, some of the songs which depart from the indie template don't fare so well. Delorean's 'Stay Close', a shy and very polite attempt at making dance music for shy and very polite people, is pathologically unexciting. Is it best to conclude, then, that the label should stick to what they know? Perhaps not: the record's most impressive moment is also an experimental one, Kurt Vile's prettily blurred seven-minute psych-pop song 'Invisibility: Nonexistent'. Embracing eclecticism may lower Matador's strike rate, but when they connect with a shot, they really connect.

The good on this compilation outweighs the bad. Its major problem, besides its lack of consistency, is that many of the bands featured are album artists who are not best experienced in short doses. However, there are enough high-quality moments to justify its purchase, and most listeners will be introduced to at least one exciting band or artist completely new to them.