It's the most wonderful time of the year. That guy from the first series of Big Brother is starring as Dick Whittington's cat in the local pantomime, uncouth youths are pelting innocent people at bus stops with snowballs, and every café, store and doctor's office you go in you hear Noddy Holder screaming, "IT'S CHRISTMASSSSS!" 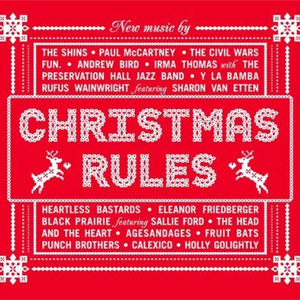 Now, whether you're a fan of holiday music or not is irrelevant because, just like Brussels sprouts, it's an unavoidable staple of the festive season so you may as well just shut up, smile, and swallow it.  This "alternative" collection of time-honored classics and lesser-known ditties is brought to you by Hear Music, the label owned by Starbucks, and if I had to describe this album to you in one word, that one word would be, well, "Starbucks."

The album gets off to a Fun start.  Not literally, it's just the band Fun covering Yuletide favorite 'Sleigh Ride'.  The fundamental problem with Fun's interpretation is that it doesn't sound like Christmas.  Unbelievably, some might say criminally, they didn't care to record the magical sound of sleigh bells.  It's all swirly synths and over-produced vocals and it doesn't make me want to drink mulled wine by the fire goddammit!

Next up, The Shins don't stray too far from the original with their take on Paul McCartney's 'Wonderful Christmastime.'  The lo-fi stomp and fuzzy bass give it just enough Shins identity to make it their own, but they can live without fear of retribution from the "I like the original better" puritans.

Then the highlight of the album comes when Rufus Wainwright & Sharon Van Etten duet on sex pest anthem 'Baby, It's Cold Outside.'  It's just the two of them with their piano in your living room.  It's sultry and it's cozy and now I'm reaching for the mulled wine.

Mr. Paul McCartney himself pops up next with an intimate soft jazz version of holiday standard 'The Christmas Song (Chestnuts Roasting On An Open Fire).'  Perhaps the most "Christmassy" sounding song on the record, the nostalgic, velvety tone of Macca's voice provides the perfect soundtrack for decorating the tree with your loved ones while the snow falls silently outside and the cat wonders why the hell there's suddenly an evergreen conifer growing in the living room.

With the bigger names and better-known songs now out of the way the album sort of transcends into a sullen bluegrass folk album with an overriding tone not commonly associated with Christmas cheer.  That's not to say it's bad, but it is to say it's not Bing Crosby.  Later highlights include The Heartless Bastards doing 'Blue Christmas' and The Head And The Heart's rather charming version of Frank Loesser's (who, incidentally, penned the aforementioned 'Baby, It's Cold Outside') 'What Are You Doing New Year's Eve?'

The difficulty in trying to breathe new life into old songs is that we humans don't like it when classics get tampered with (are you reading this George Lucas?).  At Christmastime especially we want things to be the way they always were.  We want to eat and drink the same things with the same people, we want to watch the same movies, and we want to listen to the same songs.  I believe it's called tradition.  What's more, the artists on Christmas Rules are dueling against a double-edged sword.  Wander too far from the original and people won't connect with it, stay too close and they'll call plagiarism.  But here's an idea: Why don't we get today's artists to write their own original Christmas songs?  The fact that the youngest song on Christmas Rules is Paul McCartney's 'Wonderful Christmastime' (written in 1979) and most of the others are from the 1950's and beyond would suggest there's been a thirty-year drought.  It would make for a much more interesting project and who knows, maybe contemporary artists will be covering them as Christmas classics in the year 2042.