Review of Bob Dylan In The Eighties: Volume One Album by Various Artists

Producers Jesse Lauter and Sean O'Brien's pet project for ATO Records, 'Bob Dylan In The Eighties: Volume One', is a curious proposition. A cut above the usual covers compilation, it's an ambitious attempt to reclaim lost gems from Dylan's much maligned career low point. While many listeners may not realise it, the eighties were also a prolific period for Dylan. Cherry-picking material from his eight studio albums released in just over a decade is an interesting challenge for the likes of the Hold Steady's Craig Finn and Blitzen Trapper. But, ultimately, the album doesn't elevate itself beyond a curio for the most dedicated Dylan fan. 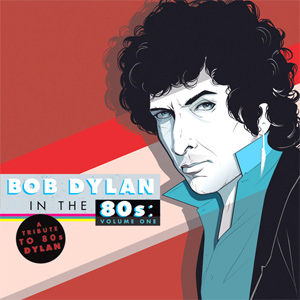 The good news is that, for the most part, the project does succeed in breathing new life into songs long since neglected by Bob. Stripped of the fashionable production elements of the time, there is indeed hidden beauty to the updated and diverse performances here. The song choices are also bold. Not content with simply choosing better respected compositions,there's a feeling that the artists have really tried to push themselves. For example, many would have put their money on 'Oh Mercy''s 'Most Of The Time' making an appearance, far fewer would have hoped for 'Under The Red Sky''s 'Wiggle, Wiggle'. Surprisingly, only the latter is attempted here. Yet it doesn't feel like an academic exercise to rescue these songs from obscurity, there's a real affection for the material and many of the performances warrant multiple listens.

The bad news is that, despite an impressive selection of artists contributing, the range of musical genres covered does provide for some really awkward moments. For example, I'm pretty sure that we didn't really need a dub reggae version of 'Brownsville Girl'. There's nothing that detracts from the source material, but something a little more cohesive may have been more compelling as a record. When the songs really are stripped back to their bare bones, they work far better - perhaps because the focus shifts from musical reinvention to Dylan's lyrics. That's where the real joy is here, because the eighties production and flat delivery on records like 'Down In The Groove' really did mask some classic writing from Bob.

As such, it's songs like Carl Broemel's eternally hopeful interpretation of 'Death Is Not The End' that are worth seeking out here. He transforms the laid back gospel vibe of the original into a hushed prayer, which brings far more meaning to Dylan's apocolyptic vision of a time when "the cities are on fire with the burning flesh of men". It's a similar story with the efforts of Lucius' garage rock rendering of 'When The Night Comes Falling From The Sky', Hannah Cohen's melancholy version of 'Covenant Woman', and Marco Benevento's instrumental take on 'Every Grain Of Sand'.

So while Bob Dylan In The Eighties: Volume One certainly succeeds in making fans re-evaluate the merits of Bob's lesser loved work, it's unlikely that it will draw anyone new to either the cover versions or source material. Perhaps that's because it's not an attractive option for the casual listener, perhaps it's because, if you don't know Dylan, this isn't the place to start. Whatever the reason, it does demonstrate the popularly held view that Bob is on occasion a better songwriter than performer. Some of these tracks really are better than the originals, but it's not a strong enough selection to be an essential companion to any Dylan fan. Nor does it justify an attempt at 'Volume Two' if that's what Lauter and O'Brien were hoping for.