As the undisputed expert on the origins of Punk Rock in the UK not to mention being the author of critically acclaimed document of said times 'England's Dreaming', Jon Savage is pretty much an icon in his own right. As a staff writer for the long gone and sadly lamented weekly Sounds in the late 1970s, he almost single-handedly discovered a whole new realm of bands both here and across the Atlantic, bringing their wares to an unsuspecting audience in the meantime. Not that many of the bands on this compilation, 'Black Hole: Californian Punk 1977-1980' attained much in the way of recognition either at home or in the UK. 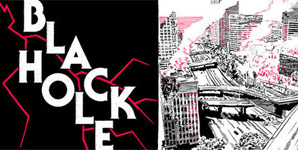 That many of the bands featured here never actually got around to releasing an album, as the majority's nihilistic viewpoint matched by the visceral intensity of their sound seemed to be taken literally in many cases. Indeed, whereas the likes of the Sex Pistols and John Lydon supposedly meant it, maaan, one would certainly never expect to see Don Bolles of The Germs or Tommy Gear from The Screamers advertising butter on primetime television some thirty years on.

In the case of the aforementioned Screamers or Black Randy And The Metro Squad among others, they never actually got round to putting out a record of any shape or form. Instead, the live bootlegs and demo recordings that resurfaced for 'Black Hole' remain as a fitting artefact of their brief spell in the Californian underground spotlight. Others, such as feted scene leaders The Germs and the more politically charged Dead Kennedys went on to achieve legendary status in their own rights. Listening to 'Forming' by The Germs now sounds quite poignant bearing in mind the band's dissolution, which resembled a catastrophically orchestrated train wreck. Singer Darby Crash's subsequent suicide and guitarist Pat Smear's later collaborations with both Nirvana and the Foo Fighters serving only to strengthen the myth, although it has to be said their one and only long player '(GI)' still stands the test of time today.

Elsewhere, the radical left wing political motivation of The Dils can be heard on 'I Hate The Rich', a two-minute tirade that pretty much does as it says on the label. The Weirdos' contribution 'Solitary Confinement', The Flesheaters ascorbic 'Pony Dress' and 'We're Desperate' by X, arguably the only artists to achieve corporate mainstream success later in their careers are just some of the highlights. Even the title track itself, performed here by Urinals and recently covered by current California scenesters Grass Widow on their self-titled debut EP last year will undoubtedly go down in history as a pivotal moment in both the formation of Californian girl groups like The Go-Gos and the whole C86 movement, while the dark aesthetics of 'Los Gatos' by The Sleepers predates the whole goth era by a good four years or so.

Overall, 'Black Hole' is a near faultless compilation of artists long since despatched to the archives of time that deserves to be owned by anyone with even the faintest of interests in punk rock and its development.