The fifth and most recent annual compilation of recordings from BBC Radio One's Live Lounge is yet another selection of aural treats. A collection that mainly features covers of other artists' songs alongside a smattering of bands performing their own tracks, volume five maintains the high standard that the preceding Live Lounge compilations have set.

The two disco collection opens with Plan B's fantastic beat-box-ridden cover of Tinie Tempah's 'Pass Out' and features a selection of some of the biggest names in pop music before concluding with Scouting For Girls' novelty cover of the Glee cast version of 'Don't Stop Believin', originally by American rockers Journey. Amongst the tracklisting are indie band covers of diva songstress numbers such as The Big Pink's version of Beyonce's 'Sweet Dreams, and, in contrast, Taio Cruz's version of Mumford & Sons' 'Little Lion Man'; an R&B star going all indie-folk on us. Those that have, like the aforementioned, taken the song and made it entirely their own rather than regurgitating the original in much the same style (Mike Snow's 'In For The Kill', for example), are much more stand-out. 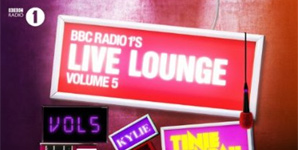 Hurts' goose bump-inducing string-laden stripped back version of their own song 'Better Than Love', with the exception of the authentically live mistuning in Hutchcraft's falsetto vocal, is among the undoubted highlights of this volume. Earlier in the tracklisting, after featuring on their debut album, Happiness, Kylie Minogue pays tribute to Hurts with her hauntingly beautiful, piano-led rendition of their song 'Wonderful Life', proving this compilation is right up to date as Kylie's Live Lounge was aired during the final week of September.

Other highlights are Jay Sean's soulful version of Black Eyed Peas' 'I Gotta Feeling' and Jordin Sparks' cover of Alicia Keys' 'Fallin', which proves an outstanding vocal regardless of the fact that it's literally a clone of the original. The Lady Gaga covers also stand out; the acoustic of 'Alejandro' by All Time Low, who've stripped the song right down, and the rap-heavy cover of 'Telephone' by Roll Deep, which snuck onto the tracklisting from a Radio 1Xtra session. Amongst a 38 song tracklisting, there's bound to be a few inconsistencies, but then such is the unpredictability of live performance. Alesha Dixon is better as a Strictly judge than her singing performance on 'Drummer Boy', the second of her performances to be featured on Live Lounge compilations.

Despite the absence of a few Live Lounge gems from this year (Delphic's fantastic version of Cheryl Cole's '3 Words', for example), Volume Five is another superb and varied collection of some fantastic live recordings from the recent Live Lounge archive. A good, solid and enjoyable compilation.