Review of An Taobh Tuathail Album by Various Artists

Review of the compilation album An Taobh Tuathail released through Psychonavigation Records. 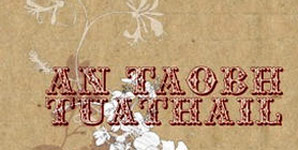 'An Taobh Tuathail' is a cult underground music show broadcast on RTE, Radio na Gaeltachta, in Ireland and is presented by host Cian O Ciobhain. Having started on May 1st 1999 the show has been going for nearly eleven years. It goes out weekdays between 11pm and 1am and Cian says the 'emphasis is on music of a quieter disposition.' Cian wants to get away from other highly influential Irish radio shows which he cites as showcasing 'white boys with guitars.' His laudable aim is to promote 'quality underground sounds from all over the world.'

Volume III of his ongoing series pulls together some of the shows favourites over the last three and a bit years. There is definitely a distinct and deliberate lack of guitars throughout the collection and an uncompromising bias towards synths and technology derived creation. The assembled register of chosen artists is indeed from around the world, although there is a slight Irish slant which is by no means to its detriment. Most tracks are of the ambient, atmospheric and instrumental variety. If you're a fan of the Fripp/Eno/Sylvian style, moody yet beautifully constructed and orchestrated, musical masterpieces then you won't be disappointed with a huge degree of the content on the album. There are moments of the dysfunctional and disparate that are fantastic in breaking unfamiliar acts in a way that all challenging radio shows should. Nods in the direction of Kraftwerk, Orbital, The Grid and Andy Weatherall give further credibility to what is by anyone's measure a quite unusual collection. It's almost as if you could have made this as your own, personal, late night, emotionally charged, self reflective I-Pod playlist, but 'never in a month of Sundays' would you imagine someone having the conviction to put it out there as a commercial or artistic venture.

Early on there are slower 'torch song' numbers by Essie Jain, 'Haze', and Roshi feat Pars Radio 'Night Swimming' that set up the tone and mood of the collection very nicely with their mellow and yet haunting vocal style. There on in you are treated to some ambient oddities and atmospheric anomalies. The only slight misfit in this individual compilation is the inclusion of Galway's B-Movie Lightening track, 'Triple Trouble'. It is a far more up tempo number, with a Green Gartside falsetto vocal set against some light dance beats. Among the highlights are the experimental, psychedelic pop of Glasgow's Factory Kids with a Luminous Remix of 'Look After Everyone', complete with a very ghostly vocal and weirdly mesmeric backing track. The Electronica of 'Shinkansen', by Berlin's Miwon, is possibly the stand out track on the album. It may have clearly traceable lineage from its fellow Autobahn appreciating countrymen but in a far less intense, less obvious and altogether more relaxing fashion. (If it transpires that all you come to truly appreciate from this album is 'Shinkansen' it may well be enough). Birmingham's Them Use Them provide some near industrial electronics with 'Able' and Polish, Gdansk, composer Jacaszek challenges you with one of the more inaccessible pieces of music, a static laden, scratched and shredded number, entitled 'Walc'.

Threaded throughout An Taobh Tuathail is a peppering of more established performers. There is The New Wave Trance of Circlesquare with 'Music For Satellites' from their album 'Music About Dancing And Drugs' and the ever rising star of Animal Collective is represented here with 'Loch Raven' from their album 'Feels'. The oldest track amongst the collection, a firm favourite of the radio show, falls to Liverpool's Peter And The Wolf with there 2006 number 'The Highway'. It serves as a fitting close to an oddly attractive album. (As Marc Sunderland from the band sings, 'it's good for hangovers and brings us together').

'An Taobh Tuathail' (The Other Side) is a different and welcome collection of handpicked songs full of charming peculiarities and nice little idiosyncrasies. It may not find itself troubling the charts but it may just highlight some new and interesting acts that might otherwise pass you by.