Dane Ander Trentemoller created a minor stir in electronica circles with his 2006 debut The Last Resort, an exercise in minamalist techno which owed a debt to Riche Hawtin's work as Plastikman. Taking the road less travelled since, his career has subsequently extended out to creating a soundtrack for the Danish film Det Som Ingen Ved in 2008, and this cinematic influence extends directly into his turn at the controls of Late Night Tales. 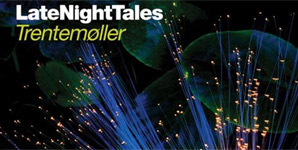 Firstly, a warning for anybody expecting a collage of the usual suspects - Orbital, LFO, Kraftwerk etc. - because this is a body of work which is dark and wildly eclectic, and that refuses to serve as a bland patronisation of the machine movement's founding fathers.

Perhaps the simplest way to describe the curator's selection is a bit like an alternative soundtrack to David Lynch's pivotal cult film Blue Velvet, from the soporific religious metaphors of Low's That's How You Sing) Amazing Grace to the twisted, primitive garage rock of The Oh See's Cramps-esque Ghost In The Trees.

Each edition of Late Night Tales allows the artist to re-work a song of their choice, and here the epic, post-gothic take on Chris Isaak's Blue Hotel - cheerily about a friend's suicide - is the kind of very leftfield white noise which echoes the transformation the former DJ has undergone from knob twiddler to de facto live act.

By definition there are numerous other goodies here which have been exhumed, of which there isn't enough space to mention, and whilst the inclusion of The Velvet Underground's Venus In Furs seems disappointingly obvious, Mazzy Star's southern gothic takes on The Doors on Mary of Silence is a genuinely dirty thrill, whilst Eden Abhez's spoken word, xylophone powered oddity Full Moon needs to be heard rather than described.

The whole thing comes a jarring and slightly inglorious end with ancient rent-a-gob Paul Morley reading a passage from the ironically selected story Lost For Words, but for anybody who worships at the altar of David Holmes or Death in Vegas, or who just likes to go in through the outdoor, consider this record very much for you.

Finally, a word to the wise. As he's making an appearance here with the Pink Monkey Birds, may I recommend that you never, ever get locked in a room with me and start talking about Brian "Kid Congo Powers" Tristan's former band The Gun Club unless you have an hour to spare. Better still, just download their fantastic debut album Fire of Love and hear what inspired Jack White so much.