Review of Transformers: Revenge Of The Fallen' Soundtrack Review Album by Various Artists 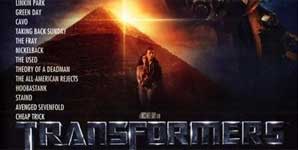 It doesn't seem long ago that any half-hyped Hollywood blockbuster would be accompanied by a star-studded soundtrack, a practise which now seems to be in decline. Michael Bay's robot fest refuses to follow the trend, presenting a collection of American rock talent.

Heavyweights Linkin Park take the headlining spot with new track 'New Divide', which is everything you've come to expect of them and little else. That's not to say it's bad, just that they've done better and are perhaps saving stronger new material for their new record. Green Day follow closely behind in the shape of '21 Guns', an epic and lifting highlight from their recent album, and for those who prefer the lighter side of rock The Fray's 'Never Say Never' is an undeniably beautiful ballad. The highlight of this compilation though is from a band who have yet to release their debut album; Cavo's 'Let It Go' is a stunning MOR anthem that hits all the clichés for a homerun that you can't help but sing-a-long and start waving lighters. Definitely ones to keep an ear out for, their contribution is closely followed in quality by Theory Of A Deadman's 'Not Meant To Be', an emo-anthem which swoons in overblown sadness.

The 'middle tier' bands that make an appearance are actually the most disappointing, not because any of the songs are particularly bad but because in their catalogues they've done much better. The All-American Rejects' 'Real World' is a prime example, it romps along nicely enough without ever really touching a nerve, while 'Capital M'E' by Taking Back Sunday is punk of a similar category. Nickelback's 'Burn It To The Ground' is unashamedly testosterone-fuelled cock-rock, swaggering with so much macho attitude you have to wonder if the Canadians are trying to compensate for something, but other than this and a dodgy remix of the Transformers theme tune this is a decent enough collection. At times there is too much style over substance, something that has been labelled at the film, but just like celluloid experience when it hits the high spots it is genuinely enjoyable.