Review of Songs of Anarchy: Music from Sons of Anarchy Seasons 1-4 Album by Various Artists

Hit Television series Sons of Anarchy has everything; countless complicated and fascinating characters, interwoven plot lines and an excellent soundtrack to boot. Combining a number of the finest songs ever written with some of the most talented musicians from all walks of musical life, Songs of Anarchy: Music from Sons of Anarchy Seasons 1-4 is a collection of some fifteen tracks that instantly take the listener back to the fictional California town of Charming and the tales of its inhabitants. 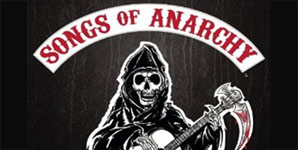 Dave Kushner, guitarist for Velvet Revolver has to take a lot of credit for the fantastic music associated with the hit series. Initially co-writing the show's theme song, he co-wrote much of the music involved with the first season before the 'house band' as it were became a separate entity entirely and the Forest Rangers, the band that play on the majority of Songs Of Anarchy were born.

The album opens with the show's now iconic theme song This Life, Curtis Stigers' excellent voice sitting perfectly alongside swampy guitar work that hearkens back to the days of Lynyrd Skynyrd, The Rolling Stones and Stevie Ray Vaughan. This heralds the soundtrack proper, entering a collection of interpretations of some of music's classic songwriters' biggest hits. First is Dusty Springfield's Son of a Preacher Man, most notable for the performance of actress Katey Sagal (who plays Gemma Morrow in the show) providing a soulful rendition of the 1968 hit. She also lends her talents to Leonard Cohen's Bird on a Wire and an excellent version of Abel Meeropol's poem Strange Fruit. Classic Gospel song John The Revelator, previously interpreted by everyone from REM to guitar virtuoso Steve Vai is given a whiskey oaked yet faithful retelling by Curtis Stigers and the Forest Rangers.

Slip Kid, from The Who's seventh album gets a high energy tribute led by Franky Perez and joined by metal band Anvil. Taking Townshend's template and lacing it with California swagger, this rendition provides the album's heaviest moments but they don't seem out of place. Gimme Shelter, one of music's all time 'un-coverable' songs gets an up-tempo treatment courtesy of the Forest Rangers, this time led by Irish folk singer Paul Brady. Where many would expect sacrilege, this version follows the same vein as This Time, before breaking into a final chorus that could last for hours.

These provide highlights among a consistently high standard of tracks throughout Songs of Anarchy. Despite the legendary nature of many of these songs, these are not simple covers. Where previous efforts have failed to live up to the originals, these songs are complete reworks, giving well-trodden works a new identity. A combination of talented musicians throughout and excellent production means that this soundtrack not only does the songs justice, but also the show whose events it has chronicled.