Review of SID Chip Sounds: The Music Of The Commodore 64 Album by Various Artists

If, like me, you were a child of the 1970s, it's likely that your first dalliance with a strange gadget known as a computer would be the Sinclair ZX81. Or if you were really lucky maybe the Commodore Vic20 even. As the 1980s progressed, so did new technology and in January 1982, Commodore launched its newer, enhanced model, the C64. At the time considered something of a market leader thanks to its 64k memory and unique sound and graphic capabilities, the C64 undoubtedly served its purpose as the launch pad to the all-singing, all-dancing world of the PC we know and can barely function without today. 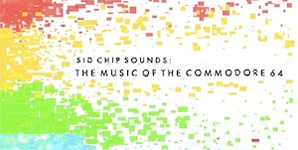 Mainly used for games back then, the C64 brought the amusement arcade into one's living room without freeloaders peering over your shoulder commenting how good they are at Commando and therefore if you let them play one life they'll get your name on the high score board. Ah, those were the days! Not that I ever owned a Commodore 64 myself. The good old Amstrad CPC464 serviced my needs thank you very much.

Anyway, one resounding feature of the Commodore 64 rendering it head and shoulders above the competition was the digitally enhanced sound emanating from within the three channels of its SID (Sound Interface Device) chip. Initially designed by Bob Yannes, later responsible for launching the Ensoniq digital synthesizer establishment. The SID chip may have had several limitations - for example, the C64 hardware only allowed for three voices at once meaning composers often only assigned one voice at a time playing quickened arpeggios, which gave the impression successive sustained chords were being played instead. Over time, a number of these composers developed reputations and ultimately, careers from their musical exploits on the C64, many of them proving inspirational to artists like DJ Scotch Egg, Crystal Castles, and many of the first wave of Warp Records roster such as Sweet Exorcist and LFO.

'SID Chip Sounds: The Music Of The Commodore 64' collects eighteen pieces of music first heard on games now heralded as retro classics. From Ben Daglish's uplifting techno that characterised both 'The Lost Ninja''s 'Wastelands' and 'Wilderness' segments through to Martin Galway's excessive, occasionally bordering on classical compositions - the eleven minutes plus 'Parallax' for instance takes a trip through a world only Mute Records' Daniel Miller and The Aphex Twin could possibly comprehend - there's little doubt several of the tracks on this compilation warrant the term "groundbreaking" in large, bold letters.

Indeed, for those with a passion for history lessons in the development of electronic music 'SID Chip Sounds: The Music Of The Commodore 64' is an essential purchase. However, for the mere mortals among us, it's difficult to envisage what source of pleasure most would get out of devouring the contents of this record in one whole sitting other than for the purposes of nostalgia.