Review of Showcase: Independent Sounds of Yorkshire and Humber Album by Various Artists

Let's start with some good news: this compilation contains precisely no second-rate Arctic Monkey pastiches. There are no half-arsed tributes to the Kaiser Chiefs, and no songs with more than a passing sonic resemblance to The Cribs. If any bands are still performing 2005-vintage laddish northern rock in the pubs of Doncaster and Wakefield, then the compilers of this record have wisely decided to ignore them, and as a result Showcase: Independent Sounds of Yorkshire and Humber 2011 (or SISOYAH2011, as I believe the kids are calling it) does a good job of dismantling a popular preconception about the music being produced in the region. It doesn't, however, try to construct a new identity for the area; this isn't an attempt to showcase a fresh scene. It's a collection of nineteen eclectic tracks, some of which are interesting, some of which flawed, and some of which are both: no more, no less. 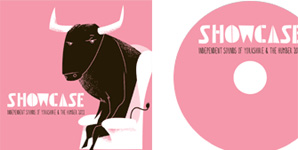 It shouldn't be a surprise that the music on show is stylistically varied. After all, this record's geographical remit includes both the beautiful countryside of the Yorkshire Dales and some notably poor urban areas. It's still odd, though, to hear Juice Vocal Ensemble's pleasingly oddball classical harmonies and handclaps transition into Rolo Tomassi's frantic, tetchy post-hardcore, or Spectrals' landfill indie giving way to the elegant, if borderline kitsch, piano-driven delicacy of Threads Orchestra's 'Gene Wilder'. There's certainly something for everyone; the flipside of that, of course, is that there's everything for no-one. Even leaving aside the variable quality which is an almost inevitably feature of such compilations, only those with an especially broad taste in music will find themselves returning to every track.

The album starts strongly. Its opening two acts, Pulled Apart By Horses and Dinosaur Pile-Up, clearly spend a good deal of time listening to nineties alternative rock records, and they share a love for heavy, visceral riffing. Pulled Apart By Horses are spiky and sarcastic, and contain traces of both Future of the Left and Kong; they have a guitarist called James Brown, a song called 'I Punched A Lion In The Throat', and another track with a chorus which goes 'Yeah! Fuck Yeah! Whatever!'. In other words, they have a lot going for them. Dinosaur Pile-Up are also well worth a listen; they play clean cut, straightforward rock full of Nirvanisms, but with none of the staid seriousness and professional angst of most latter-day grunge bands. Non-believers might be tempted to quote Alex Turner's sneering dismissal of a deluded local band: 'And yeah I'd love to tell you all my problem/You're not from New York City, you're from Rotherham'. But let's ignore the non-believers.

There are other strong early contributions. David Thomas Broughton's quirky folk contains some interesting ideas; at one point, he deliberately derails his own song with some incongruous and jarring keyboard bleeps and bloops. His voice, which has a grandness to it reminiscent of Antony Hegarty, deserves a wider audience. Bear Driver offer cutesy indie-rock; they're not breaking any new ground, but they're fun in the same way that the likes of Beulah and Bearsuit are fun. As the album progresses, the quality control slackens a little, and it's necessary to sit through the likes of Tigers That Talked, whose attempt at earnest widescreen emoting is rather undermined by the cheapness of their electronic drum sound and the dreariness of their whining strings. But there are still moments of quality, and few real failures. There's a lot of promise on show here.