While the major record labels have been in financial decline for over a decade now, mainly bemoaning the increasing influx of illegal internet downloads for their peril, many independents have thrived, largely by operating purely within their means and little else. One such imprint to have prospered is Bella Union, the label founded by former Cocteau Twins Robin Guthrie and Simon Raymonde in 1997. Having initially created the label as a medium for putting out their own music - Raymonde's first solo record 'Blame Someone Else' being the first release on Bella Union - it was the early signings of The Dirty Three and Lift To Experience that set the cat amongst the pigeons as it were. Although Guthrie essentially took a backseat in 2000 to concentrate on his solo career, leaving the running of the label almost solely to Raymonde, Bella Union has gone from strength to strength in releasing records by then-unknowns such as Beach House, Fleet Foxes and Midlake while recently putting out pivotal long players from the likes of The Walkmen and Explosions In The Sky. 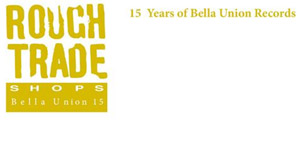 It's perhaps rather fitting then that Rough Trade; themselves figureheads of all things independent, should choose to honour Bella Union's fifteenth birthday as the latest incumbents of their "Rough Trade Shops." compilation series. Collecting together a whopping thirty-four tracks from Bella Union's extensive back catalogue, all recorded and released by a selection of the many artists to have graced the label, it's an eclectic and somewhat flawless mix documenting the history of one of the UK's finest independents.

Picking favourites is a thankless task when faced with so many to choose from. Indeed the absence of some of Bella Union's finest artists; Lone Wolf, The Kissaway Trail and Phil Selway are among those not included here; highlights the quality Raymonde and to a lesser extent Guthrie have assembled over the past decade and a half. 'To Guard And To Guide You', the penultimate track from Lift To Experience's classic and only long player 'The Texas-Jerusalem Crossroads' serves as a timely reminder for one of the greatest debuts since the turn of the century. Midlake's 'The Jungler' from 2004's 'Bamnan And Silvercork' hints at the greatness set to follow and subsequently occurring in later years.

Indeed, flicking through the tracklisting is almost like composing the perfect iPod playlist depicting the best independent artists of the past fifteen years. Treefight For Sunlight's excellent 'Time Stretcher' from last year's eponymous sophomore record, the delectable Laura Veirs' 'July Flame' and Van Dyke Parks at his most eccentric on the Noel Coward-esque 'Be Careful'. Fast forward to a selection of some of this year's best releases from the label; Wild Nothing's 'Shadow', M.Ward and 'Primitive Girl' and the vastly underrated Peter Broderick's quaint lament 'Colin'.

Overall, there's little here not to enjoy, and as birthday celebrations go, this really is as good as it gets.