Review of Renaissance: The Mix Collection; Tale of Us Album by Various Artists

The compilation CD is something of a dying art form nowadays, replaced instead with Soundcloud mixes, Mixcloud playlists and so forth; the lost art of assembling a physical release that people might genuinely be interested in seems to be a waste of time, money and energy altogether. Thankfully though, this isn't an idea shared by everyone, in particular the people at Renaissance Recordings, who have released an inspired mix collection featuring some of the biggest (and some not so big but still equally exciting) names in house and dance. 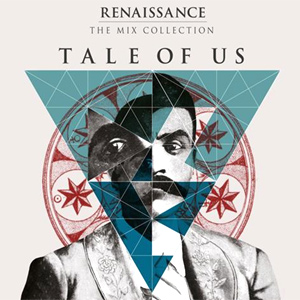 Fashionable or otherwise, the Tale of Us mix is a great little teaser into some of the more obscure factions of house and deep house, with Gold Panda, Simian Mobile Disco, Daniel Avery and a Four Tet remix being some of the biggest names on the record. The lack of big names by no means spells bad things for the album though, as the newcomers take on the task of filling out the album with ease and impressive consequences.

Split into two discs, the first is a collage of ethereal, dreamy tracks stood tall next to more serious house bangers, Gran Cavaliere's opener 'Dancing Alma' setting the ball rolling with a lush undercurrent that runs through most of the earlier tracks. By the time we get to the crashing cymbals mid-song in 'Life and Death' by Tale of Us & Clockwork featuring The/Das, the pace begins to pick up, but it isn't until we reach the groovy beat and wobble of the bass on Roman Flügel's 'Cookies Dust' that things really start to escalate. Flügel's track blends effortlessly into the equally infectious 'Hardboy' by one of house's most watched up and comers, Scuba. Although he is only on remix duty on FaltyDL's 'Straight & Arrow', it is fitting that Kieran Hebden/Four Tet makes an appearance as his influence can be heard throughout the mix. The track is awash with his trademark vocal glitches and builds from a cavernous chiller to a seriously deep beat.

The album works like a mix; the songs don't stop and start but rather flow together as though a live-in DJ were controlling the album. This obviously works tremendously to the album's advantage as it not only helps with the flow of it as an independent listen, but also makes it fit into a party soundtrack just that little bit more seamlessly.

Disc two is much more intense, Christian Smith's Hypnotica Remix of the Carl Craig track 'At Les' really stepping up the potency of the album's tone. 'Upon Ourselves (Osunlade Stripped Mix)' by Argy featuring vocals from Bajika makes this a little too dark and boding, but things start to pick up again by the time we reach the swirling, hypnotic 'Point In Time' by Lake People, before we gradually travel further into deep techno territory. By the time we reach the drop of Avery's menacing break-beat master-class 'Water Jump', you know we're in a darker, late night/early morning listening bracket.

The timing for this album couldn't have been better, with house music currently dominating the charts and clubs. Whilst these tracks would struggle to knock the latest Disclosure track from the Radio 1 playlist, consider Tale of Us as the thinking man's house music, the kind you should progress to after 'White Noise' has reached 100+ listens on your iPod. Tale of Us obviously isn't for everyone, but for those of you with an active interest in house or just electronic music in general, the mix is without doubt worth a listen.