There is nothing like a mad, loud compilation to warm us all up through this cold winter that is ahead of us. Luckily, Northern Star Records return, bringing out their second Revolution In Sound compilation album and if it is anything like the first album, it is going to another loud roller coaster of fun! 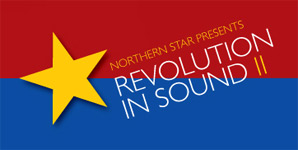 First things first, though: naturally, Northern Star is going to put a few of their own artists on this album; not because they are trying to get some free publicity but because this is exactly within the genre in which they lie in. This is probably the best place to start with the artists that sit on their record label.

The Nova Saints - who are currently boasting the release of their debut album - feature on this album with 'Indian Summer', a great little track that will get the listener intrigued. What should get you more intrigued is this is the best that they have to offer and do you know what that means? It means you now need to go and find out what is better than The Nova Saints' offering.
Next up is the Fantastic Youngteam with 'Adrift'. This band has struck on a clever way of naming a song and making that song sound like its name. Just close your eyes and listen; as you do, you will find yourself drifting away to another place, far from reality. Obviously, the downside is that after four minutes and seventeen seconds, you are brought back to reality.

The Lost Rivers is next on the album and if you are one for pure noise and feedback then this is the band for you. There is something infectious about 'All Dark (For The Last 24 Miles)' but what it is, I can't put my finger on.
Last on the album is the perfect madness that is Perfect Blue. 'Room 35' is something you would expect to hear on The Twilight Zone, or some kind of mad Sci-Fi film. Beware of Perfect Blue: they are haunting and will be out to get you next! 'Solitary Rush' by Simon Says No! is the perfect track to show what this album is all about: plenty of guitars; people who write their own songs; who play their own songs and sing their own songs.

Humanizer is something you could happily hear on the radio waves. It is fast and has a classic, addictive riff to it. The difference between this track and 'Arthur Brown Gets Me Down' is it seems a bit mellower and spaced out but that in itself just entices you to crank up the sound and lose yourself. I think it is one of the best songs on this album, which isn't a discredit to any of the others but it just shows what a high standard the second coming of Revolution In Sound really is.

Kontakte make their second appearance on this compilation. They literally hit you in the face with 'Superbug' and its grating noises. In places, it sounds like they are clanging steel with massive lump hammers. It all works, though and Kontakte prove that it doesn't matter what the noise is, it's what you do with that noise is what actually counts. This is just a perfect haunting track but don't listen to it before you go to bed if you have a nervous disposition.

It's albums like this which can only be successful and worthwhile if they receive the support from those who love music and who are true to the music they listen to. Fight the cause! Let's only hope we see some of these artist elevate and progress further for all to hear.