John Peel's revered Radio 1 show pushed boundaries: it played music no other programme (or at least no other legally broadcast programme) would touch. Peel's early embrace of punk rock, together with its various splinter movements, is often cited as an example of his vision and open-mindedness. Too often, in fact. While Peel was alive, he played music of all kinds, constantly seeking new and interesting sounds; but interviews with him, and articles about his life, frequently focused on his love for a handful of bands and songs. His untimely death did little to re-shift this focus. What would you expect to find on this compilation? Something by The Fall, of course, together with 'Teenage Kicks' and all the other songs in the Peel-approved canon, even though the idea of an established canon of approved acts could not be further removed from the man's own view of music. 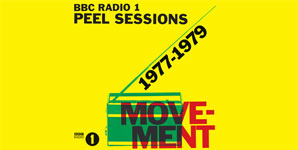 In fact, and to its credit, Movement does a commendable job of ignoring the obvious. There is nothing by The Fall. An Undertones song is featured, but it's the splendid 'Get Over You' rather than 'Teenage Kicks'. Pleasingly, there are contributions by the likes of the Human League and OMD, whose appearance here might be regarded as blasphemous by those expecting a succession of off-kilter punk numbers. It's possible that this is a happy accident rather than an intentional decision on the part of the album's compilers. Perhaps the usual suspects couldn't be licensed; perhaps, although this seems unlikely, they recorded no sessions between 1977 and 1979. In any case, the result is that Movement is a refreshing and sometimes surprising listen.

A number of the comparatively unfashionable, and therefore unexpected, selections are revelatory: the Human League's sinister, skeletal synth-pop creep 'Being Boiled' is a highlight, and UB40's loping, politicised 'Food For Thought' caught this reviewer off-guard by not being a complete waste of everyone's time. The endearingly scattershot tracklisting has its downsides, though. Some of the bands who typically get ignored when this sort of compilation is put together get ignored for a good reason. The first disc features a run of uninspired and samey pub rock tracks, courtesy of the likes of the Angelic Upstarts and The Ruts, which leave nothing in their wake but a vague memory of chugging guitars and empty sloganeering.

The best performances here come courtesy of The Slits and undervalued post-punkers The Monochrome Set, both of whom used their appearance of Peel's show to remodel their material rather than boringly recreate it. The Slits play an energetic version of 'Love and Romance' which rocks harder than the album version. It's charmingly chaotic: 'I forgot the lyrics now', improvises Ari Up at one point. The Monochrome Set's take on 'Strange Boutique' improves considerably on the single version, stripping it of its cheap-sounding keyboards. Elsewhere, the more notable tracks include Wire's gothic story-song 'The Other Window', PiL's 'Poptones' (complete with wonderful, rambling Jah Wobble bassline), and The Special A.K.A.'s 'Gangsters' (a song which, lest we forget, opens with the lines 'Why must you record my phone calls/Are you planning a bootleg LP?'). Something for everyone, then, which is a pleasant surprise.