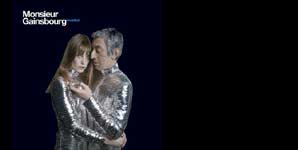 A tribute album is always a thorny prospect, most of them are highly flawed affairs, and this tribute to the original letchy Frenchman Serge Gainsbourg is no different. That's not to say that there aren't any choice cuts on the record though, Franz Ferdinand's attempt at "A Song For Sorry Angel" is an explosive punk-pop thriller which they're so adept at anyway. The inclusion of Jane Birkin, the English rose who shocked middle England in the 60s with her orgasmic moaning on "Je t'aimeâ¦.moi non plus", is a masterstroke, her breathy vocals a perfect contrast to Alex Kapranos' manic shouts.

Elsewhere, obvious choice Jarvis Cocker adds his languorous vocals to Kid Loco's light and funky backing on "I came just to tell you I'm going", with excellent results, and The Kills deliver a moody and menacing "I Call It Art." There is, however, absolutely no excuse for having Brian Molko appear twice. Once with Faultline and Francoise Hardy on "Requiem for a Jerk", and again with Placebo on synth led clunker "The Ballad of Melody Nelson", his nasal tones are about as welcome as George Bush at a Friends of the Earth rally.

The Rakes somehow take "Le poinconneur des Lilas" and make it "Just a Man With a Job" surprising no-one with their sub-Strokes interpretation, and end up typifying the main problem with this collection. When you take the lyrics of Serge Gainsbourg, an artist renowned for his lexical flair, and translate them into English you are bound to lose something on the journey. Another overt example of this is Cat Power and Karen Elson's attempt at "Je t'aime moi non plus." It is a pretty offering, the delicate melody sounding sweeter with a female voice, but translated into English, it has very little of the filthy allure that made the original so memorable.

With this in mind, it's surely the tracks that are decent in their own right that make this worth the asking price, like the aforementioned Franz Ferdinand and Kills tracks and also Marc Almond's sleazy electro take on "I'm The Boy" provides a few minutes of fun.

Elsewhere, the normally stellar Tricky and Michael Stipe make dull uses of their respective tracks, and Marianne Faithfull hams up Gainsbourg collaborators Sly and Robbie's skewed reggae backing with her am-dram vocals. This is a record that is as frustrating as it is entertaining, and is a must for Gainsbourg completists, but just a maybe for the rest of us.