Review of Leader of the Starry Skies: A Tribute to Tim Smith (Songbook 1) Album by Various Artists

For those of you unaware of the criminally underrated genius of Tim Smith, he has been the lunatic mastermind behind The Cardiacs for 30 years now, influencing countless scores of musicians along the way, From Oceansize to The Wildhearts. As well as his work with The Cardiacs, Tim has also produced numerous records and directed videos for the likes of Sepultura. To say he is revered in underground circles would be to put it lightly. Sadly, in 2008 Tim suffered a severe stroke, and this compilation - put together with all of the bands donating their time and contributions for free - will raise funds for his on-going care; a worthy cause indeed. 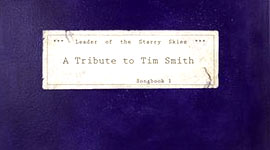 Onto the music itself, all of the bands involved have done a sterling job of representing Smith's back catalogue in the glory it truly deserves. William D. Drake's opening cover of Savour is an appropriately sinister introduction to The Cardiacs' madcap world, with strange rhythms, ethereal accordion drones and a melodic slide guitar solo. Oceansize, one of the more popular bands on the album, step away from their usual mind-bending prog-rock stylings to deliver a two minute blast of Fear. You can hear how they have been influenced by The Cardiacs more than ever here and it is a joy to hear them doing something totally different to their usual fare.

To close up Songbook 1 (hopefully, on this evidence Songbook 2 will be forthcoming and just as strong as this offering) The Scaramanga Six take on Home of Fadeless Splendour, a 5 minute melodic epic. It has to be said that they, and everyone else involved, has really done Tim proud with this. We can only wish for such a unique genius to make a full recovery.