There have been numerous punk compilations doing the rounds since time immemorial, so this would beg the question 'does the world really need another punk collection?' Well judging by the music included on this album, absolutely it does and one would be prompted to respond with a big resounding YES. The reason being is as follows. Where Punk Attitude differs from other punk albums is instead of going the usual route and focussing on what the man in the street would label punk music, it sidesteps any predictable inclusions and focuses on the musicians on the fringes, those who were there first, the ones who defined punk as an attitude and who walked it like they talked it (hence the inclusion of Gene Vincent - the original punk). The musicians who were punk before the term was even coined which would make them even more punker than punk right? 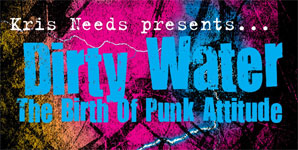 There are some familiar names here, however the standards have been mostly cast aside (aside from Nuggets favourites The Standells' Dirty Water and The Saints (I'm) Stranded) in favour of obscure gems and its exactly this voyage of discovery that what makes Punk Attitude absolutely essential. Album highlights are numerous but to these ears a shout out would have to go to the original black punk band, the criminally overlooked 'Death' with their fiery uncompromising 'Politicans In My Eyes.' When you consider Death preceded Bad Brains by several years and their album was so uncompromising it only very recently saw the light of day, its incredible. A shout out also to the fabulous 'Rocket From The Tombs' with 'I'm Never Gonna Kill Myself Again' chosen in favour of the equally nihilistic 'Ain't It Fun.' Elsewhere there are appearances by The Stooges, MC5, The Seeds, Suicide, Sun Ra, New York Dolls, The Flamin' Groovies and also T-Rex make an appearance sounding as you've never heard them before.

The album has been compiled by Kris Needs, a writer who is possibly more qualified than anyone else right now to speak about punk attitude being a musician at various points himself, the editor of Zigzag and the author of numerous books and articles focussing on the likes of The Clash,.Keith Richards, Primal Scream, Iggy Pop, Lou Reed et al - the man is a walking, talking encyclopaedia of punk attitude and this album goes some way to showing why. Overall this is a well thought through album and an absolute essential purchase for enthusiasts and anyone with even a passing interest in this style of music.