Various Artists - Just Tell Me That You Want Me: A Tribute To Fleetwood Mac Album Review

Review of Just Tell Me That You Want Me: A Tribute To Fleetwood Mac Album by Various Artists

Tribute albums are often considered musical minefields. All too often, a collection of a band's contemporaries take apart a selection of their classic tracks before being packaged and released in their own right. Occasionally, these albums offer a handful of excellent cover versions but the majority take away more from the originals rather than offering something new and exciting. This release sees Fleetwood Mac's back catalogue get a 21st Century reworking. 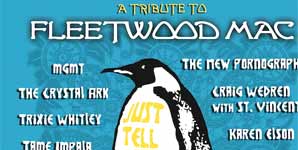 The most interesting point to note about this album is the wide range of artists included as part of the compilation. On very few occasions will the likes of Billy Gibbons be included alongside Marianne Faithfull and MGMT on one album, making for a potentially very interesting listen. Unfortunately, Just Tell Me That You Want Me fails to break the tribute album mould.

The majority of the tracks on the album do offer a degree of inventiveness and a willingness to move away from the original songs, however instead of offering a selection of reinvigorated versions, it leaves more of a yearning feeling for the originals. The rendition of Rhiannon by Best Coast is a shadow of the original, the iconic guitar lines stripped away and replaced by piano in an attempt to place their stamp on a timeless classic. The first half of the album is largely pop-centric, the likes of Marianne Faithfull and The New Pornographers offering their talents to Angel and Think About Me respectively. From there the tracks take a turn for the alternative, culminating in a sprawling nine-minute rendition of Future Games by MGMT. This second half makes for intriguing listening and in some moments, it's easy to forget that these tracks once belonged to Peter Green and Stevie Nicks such is the modern feel of these covers.

That isn't to say that the album is void of great songs. Billy Gibbons & Co's take on Oh Well is excellent, offering a drawling and whisky-soaked rendition that oozes Deep South swagger. In complete contrast (sonically at least), the version of Sisters of the Moon by Craig Wedren & St. Vincent wouldn't sound out of place on a Muse album, an anthemic stomp combined with excellent vocal melodies and inventive electronic touches providing an unexpected surprise late in the album.

Just Tell Me That You Want Me is by no means a bad album, every song is an individual take on a classic act, but there is very little in terms of replay value; the aforementioned tracks by Billy Gibbons and Craig Wedren being two exceptions. If nothing else, the record serves as proof that tribute albums are difficult to perfect and, unfortunately, leaves the listener begging to hear the original tracks.