Review of Isles Of Wonder Album by Various Artists

Isles Of Wonder is somewhat of an oddity. It's a soundtrack to a Danny Boyle production, but it's also a historical document of a moment that galvanised the British public on a world stage. Now that the Olympic fervour of London 2012 is fading, it's interesting to note that part of the legacy of the Games hangs on Isles Of Wonder. The double disc collection is a concrete reminder of the night in July that saw millions of people around the world glued to their TV's. A resounding success in its own right, the opening ceremony was at its heart an ambitious theatrical production. While Isles Of Wonder conveys the drama of the occasion, it suffers a little in the absence of its intended visual cues. 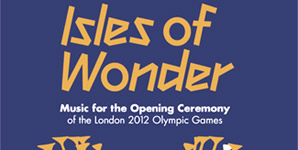 That's not to say of course that Isles Of Wonder is a disappointment, it's just a little under whelming at times. It provokes a mental game of spot the difference too. None of the takes here were those performed at the ceremony itself, instead for example there's soundcheck versions of the Arctic Monkeys. While you try to place the tracks to the memory of what you saw on the night, the album still has the power to raise the hairs on the back of your neck. Emeli Sandé's modern and minimalist reworking of 'Abide With Me' is one such magical moment here. Equally the especially composed Underworld track 'And I Will Kiss' features some impressive percussion work, notably from Evelyn Glennie.

The track listing follows the proceedings of the ceremony itself, which provides the only other problem. While the transition between so many musical styles as dictated by the magpie eye of Musical Director and Underworld mastermind Rick Smith made sense in the Olympic Stadium, here it can feel a little jarring. Frank Turner's contribution 'I Still Believe' is a great song in its own right, but feels a little disjointed from the Four Nations Choirs medley that follows it here. Frank would be more at home later on the first disc alongside the Arctic Monkeys. While it's a minor gripe for a compilation, a little bit of creative shuffling could have made Isles Of Wonder flow more coherently as an album in its own right.

The tracks themselves are all pretty much spot on though, while they're predominantly not live recordings, they still communicate the excitement of the event itself. Much of the credit goes to Boyle's decision to rope in his old friends Underworld to provide the backbone to proceedings. Smith weaves recurring motifs throughout (bells being just one example) with creative and humorous flourishes (the shipping forecast that appears in Nimrod can't help make you smile), all of which add to the very British sense of occasion.

The second disc focuses on the music used to introduce the athletes to the stadium. Heavily reliant on reworked gems from Smith's Underworld back catalogue along with High Contrast material, it's an atmospheric mix tape that wouldn't be out of place in your local gym. While it lacks the eclectic musical nature of the main theatrical event, it's actually the disc that you're more likely to return to for repeat listens.

What Isles Of Wonder lacks by being divorced from Boyle's visual feast, it certainly makes up for with its ambitious nature as a slice of Olympic history. While it may make some odd omissions (I can't be the only one surprised back the lack of Paul McCartney here), there's very little to quibble with in the track selection. If you want a musical snapshot of Britain in the early 21st century and how we got here, Isles Of Wonder paints a compelling portrait of a country celebrating its rich heritage on a global stage.