There is no denying that Gnomeo & Juliet has been quite successful at the box office, but did they really need to bring out a soundtrack too? It sounds like a good idea I'm sure, but I am more than a little sceptical. 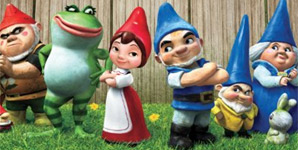 While I appreciate the need for the picture house to get as much money from a film as they can (especially when they have a huge budget to bring back in as Gnomeo & Juliet has), I'm not sure who is supposed to want this.

The Gnomeo & Juliet soundtrack could be renamed the 'Elton John shamelessly resurrects old songs and stamps his mark across a whole film' album, as this is just that. It's predominantly an Elton John album.

To give it credit, Nelly Furtado has contributed with an over synthesised version of 'Crocodile Rock'. In a way you just want to cringe for her. Did she really need to do this? Could she not have tried for a part in the actual film?

An Elton John and Lady Gaga duet was apparently the best track in the film, but has been withheld from the actual soundtrack. If this was the long anticipated highlight it emphasises the idea that this perhaps wasn't thought through. We appear to live in a time when all that matters is trying to get as much money as we possibly can from something, and complaining when it flops. Sometimes less is more, and I doubt very much that Gnomeo & Juliet will go down as one of the most iconic films of all time.

The last three tracks are instrumental, I presume to provide emotion to certain elements of the film. The desire to skip them is too much.

Soundtracks have their place, Pulp Fiction for example, but this just isn't it. Released three days prior to the film date it played a part in the build up to a star filled film. Unless you are an Elton John fan, and in which case you will have most of these anyway, it is just another Disney style album. As the film has even received many mixed reviews, this is perhaps another part of the marketing hype to make an album sound better than it actually is.