This 10" vinyl release by Leeds-based Brew Records features four tracks, all of them new: Kong's 'Ribbons', Shield Your Eyes' 'Jessica', That Fucking Tank's 'Nwonwobh', and Castrovalva's 'In Our Prime'. It's an impressive line-up, and there's plenty to savour here. 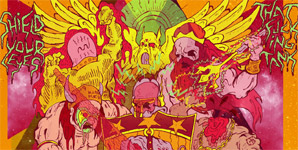 You should really go and watch Kong live. They play with their faces painted and distorted by sellotape, in a perverse reworking of the Kiss aesthetic. They mutter imaginary words into their microphones and direct wave after wave of crunching noise at the audience. On record they're not always quite as essential, but 'Ribbons' captures them close to their best: it's a crashing, thrashing parade of high-energy Albini-isms, topped off by a David Yow-ish mumbled, serial killer vocal.

'Jessica' is the best thing Shield Your Eyes have done to date, and also the best song here. It's a labyrinthian track, mazily shifting and changing direction, disorientating the listener. Kong, That Fucking Tank and Castrovalva all make visceral music, music which sets out to shake you physically; Shield Your Eyes demand a different, more thoughtful response (just as well, given that the track suffers a little from tinny, low fidelity production). This is progressive post-punk at its best; the squealing, crashing guitar and thumping drums wrap around each other with a Ballardian smash.

That Fucking Tank also make rock music with proggish undertones, but their sound has more of a cartoonish strut to it. 'Nwonwobh' is big, bouncy, and buoyed by some cool riffing. XM-3a aimed for a similar sweet-spot with the criminally slept-on 'Bad Robot Man' a few months back, and hit with even more panache.

'In Our Prime' is the record's weakest track, a frenetic, frantic burst of hardcore pitched somewhere between The Blood Brothers, The Beastie Boys and The Yah Mos Def. It's got energy and intent, but the smug vocals ('We can sing along to this bit!') are off-putting and the band fail to work the song's diverse component parts into a coherent whole. Still, the opening three songs have enough about them to make this a worthy purchase.