As the face and voice of Radio One's more cutting edge dance grooves, Annie Mac has established herself as one of the station's more credible ambassadors in recent years. Her rite of passage dates back well before Radio One came knocking at her door. Having learned about the perils of the music industry from brother Davey McManus and his bands' The Crocketts and The Crimea's minor successes and ultimate failings, it's hard to imagine the self-confessed former Camdenite party girl to have been under any illusions regarding her own future status. 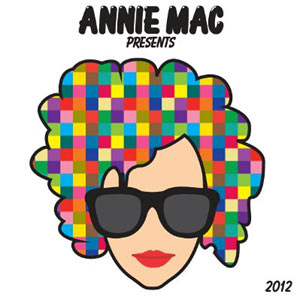 These days her show stands out like a sore thumb among the predictable slurry of boybands, watered down R&B and major label puppets permeating the majority of Radio One's playlists. Along with Rob Da Bank and Huw Stephens, she's one of a select few capable of holding their heads up high as devout champions of new music and 'Annie Mac Presents 2012', her fourth compilation since launching the 'Annie Mac Presents.' series in 2009, proves testament to that.

Comprising of a mammoth thirty-seven tracks across two CDs and almost three hours' worth of music in total, 'Annie Mac Presents 2012' might not quite be this year's definitive dance compilation but it certainly stakes its claim with serious intent. Opening proceedings with the more leftfield 'Sleaze' by Knife Party which segues effortlessly into Steve Aoki's 'Beat Down' and the Diplo produced Nicky Da B cut 'Express Yourself', it's anything but an everyday trawl through a typical nine-to-five playlist for the station that likes to celebrate itself as the bastion of new music.

Sure, there's plenty of bona fide mainstream hits here too for those in thrall to the familiar. Calvin Harris and Florence Welch's 'Spectrum', Azelia Banks' '212' and Rudimental's 'Feel The Love' all fly the flag gallantly for crossover tunes that gatecrashed the dancefloors and proper charts with maximum impetus. The Eric Prydz remix of M83's 'Midnight City' also does the song more justice than outsiders only familiar with Prydz' previous smash 'Call On Me' might expect. Add slick hip-hop cuts from the likes of Nas, Wiley and A$AP Rocky to the mix and there's enough variation here to keep everyone fixated, whatever their personal preferences.

And that's the most enticing facet about 'Annie Mac Presents 2012', for while it's unlikely everything here will be a hit with everyone, I defy anyone to be able to sit comfortably still through at least two-thirds of this record. Plus, of course, it's also released just in time for the Christmas Party rush, which means there's no excuse to have to pretend to enjoy the same old well-worn staples wheeled out year-on-year. Now let's dance..!