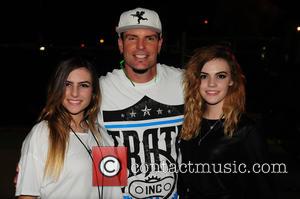 Rapper-turned-property tycoon Vanilla Ice has appeared on Tv to further discuss his embarrassing burglary arrest in Florida, insisting the saga is "just a mess".

The Ice Ice Baby hitmaker, real name Robert Van Winkle, was arrested on 18 February (15) and charged with burglary of a foreclosed home after he allegedly took items from a property close to one he was renovating for his DIY Network home improvement show, The Vanilla Ice Project.

As he left Palm Beach County Jail last week (19Feb15), Van Winkle told reporters the incident was "a misunderstanding … blown out of proportion", and he reiterated the claim during an appearance on Good Morning America on Friday (27Feb15).

He said, "It's just blown out of proportion. That's all I can say about it right now. It's just a mess, and I'm dealing with it... I wish I could elaborate."

Van Winkle reportedly told police he had purchased the burglarised home when they questioned him. It was later reported that he had not yet made the purchase.