Vanessa Hudgens loved taking on a ''darker, deeper'' role to her 'High School Musical' past for 'Spring Breakers'. 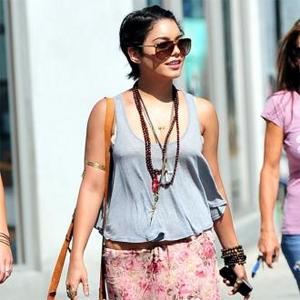 The 23-year-old star - who shot to fame in Disney's squeaky clean 'High School Musical' series - plays a college student turned bank robber in her latest movie, and is enjoying getting to show a different side to herself on film.

She told Glamour magazine South Africa: ''I've been recently doing a few projects that are darker, deeper and heavier.

''Reading these situations in the movie where our characters rob people, which has such a harsh and hard element, was something that I just liked.''

Vanessa - who is dating hunk Austin Butler - is proud of her past, appearing in 'High School Musical', as it helped to cure her of her shyness.

She said: ''I was a very shy and quiet kid until my parents took me to see my first Disney movie, 'Snow White'. After that I would always hum and sing the songs and dress up as Snow White. Funny how dressing up and singing songs in 'High School Musical' actually made me apart of the Disney family.''

'Spring Breakers', which also stars Selena Gomez and Rachel Korine, is set for release next year.