Vanessa Hudgens has debuted her new ''blunt bob'' style hair cut with a stunning selfie posted to her Instagram account. 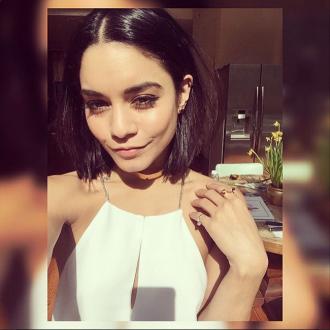 Vanessa Hudgens has had her hair cut into a ''blunt bob''.

The 26-year-old beauty has cut her long brunette locks into a trendy short cropped hairstyle having rocked a longer bob haircut in the past.

Vanessa showed off her new look while pouting for the camera in a selfie posted to her Instagram account.

Alongside the image of her wearing a stunning white halter-neck top, she wrote: ''Who needs a lob when you can have a bb (blunt bob)!! Thanks to my boo @kristinabarricelli @gemini14salon (sic).''

The 'High School Musical' star - who previously dated co-star Zac Efron - cut her waist-length hair into a lob last year but had been sporting long hair extensions until she decided to go for the chop yet again earlier this week, opting for an even shorter look.

Vanessa also appears to have said goodbye to her loose waves, having blow dried her new cropped do into a straighter but still voluminous style.

It is so far unclear what made the stunning brunette decide to cut off her glossy locks, with some reports suggesting it may be for a new acting role.

However, she's clearly put some thought into the style having posted a black and white image of a model sporting a similar cut on her Tumblr page just days before revealing her new do.

She captioned the image: ''I spy with my little eye my spring haircut! (sic)''